Most of us play different card games from our childhood and know the difference between each card. But there are things that even professional players are not likely to be aware. Like which historic figures inspired some of the cards or when they were invented.

Playing cards are used by professional players day-by-day, but even amateur players can play with them frequently. Just imagine your Friday night poker party or your grandmother’s bridge party. Dozens of different card games exist but most of them use the same type of deck. Why do we have 52 cards though in a standard deck? Which nation used them first? How long are they used now in a casino? And what measurements are made to make them secure. Find the answers for all these questions below along with other interesting details.

7 Fun Facts About Playing Cards
1. The first cards are more than thousand years old
Playing cards are said to come from China where the first cards appeared in the 9th century. Their deck only included 32 cards, which matched the maximum number of combinations of a pair of dice. The first cards in Europe became available in the 1400s but only for the elite. Italy, Spain and Germany all had their own variations. But the French invented the icons for the four suits that we still use today. Through the colonization of other countries, the French deck of cards became the standard in most countries. Interesting, isn’t it? And it’s just one from our 7 fun facts about playing cards.

2. Cards symbolize the calendar
It’s easy to discover some similarities between a deck of cards and the calendar. The 52 cards can symbolize the 52 weeks of a year, the 12 court cards represent the 12 months. The 13 different values can symbolize the 13 lunar cycles of a year. The four different suits correspond to the four seasons of a year. While the two colors of red and black can symbolize the two parts of a day, night and daytime. What’s more, if you add up the value of all the cards in a deck, when you count Ace as 1 and a King as 13, it adds up to 364. Plus the two Joker cards giving you 365 or 366, the number of the days in a normal or in a leap year.

3. Lifetime of a deck of cards
Once the cards were really precious and taken care of, but now they have a much shorter life. Especially if we are talking about cards used in a casino, where they are changed at least once each eight hour shift. But in many games they are replaced much more often than that, especially when they are handled a lot by players. The reason for that is simple. To stop them from having any special marks that could be used by the players as an advantage. Online casino sites in Belgium don’t have this issue but you can still find several great card games on them.

4. Anti-cheating measures
Other anti-cheating measures are also used for playing cards. They are made of plastic which are harder to mark than paper. While paper playing cards have two or three layers of paper stuck together with a special glue. Thanks to this material the cards are not transparent which are also useful during playing. In casinos, new decks have to be signed-off by the pit bosses or the dealers before being reshuffled. And when a pack is retired, all cards are clipped or holes are punched into them to ensure that they won’t get back to the table.

5. The Largest Card Producer Company
Probably it won’t be a huge surprise that an American company, the United States Playing Card Company produces the most cards. More than 100 million decks each year. It was established in 1867 and has been in operation ever since. USPCC has more than 700 employees with a headquarter in Erlanger, Kentucky. They make several top card brands like Aviator, Bee and Tally-Ho. But one of the most famous card decks, Bicycle is also produced by them. In 2019 their Belgian rival, Cartamundi bought the company as it was reported by online gambling sites in Belgium. 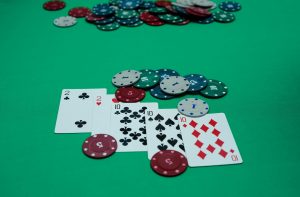 6. Famous card characters
What makes cards so special are the different figures appearing on them. You can recognize some really famous characters from history in the standard French deck of cards. Like Julius Caesar on the King of Diamonds or Alexander the Great on the King of Clubs. While the Greek goddess, Pallas Athena inspired the Queen of Spades. And the Biblical figure of Judith appears on the Queen of Hearts. Though many thought her to be Queen Elizabeth I, she wasn’t even born when the card was made.

7. Special usage of cards
Finally an interesting fact about cards and their special purpose during the Second World War. American and British intelligent agencies managed to hide maps with escape routes into playing cards which become visible once they were soaked in water. American and British prisoners used these cards to escape from German camps. Playing cards were also used in the Vietnam War to offer soldiers a way to relax. But according to some myths, Ace of Spades cards were also used to scare away Viet King soldiers who were very superstitious about them.