Wearing a mask is essential when faced with a virus like Covid-19. The notion of human protection from disease by the use of masks is a practice that goes back thousands of years in the traditions of great civilisations all over the world. A glance at African cultures.

In Africa, various traditions have used masks for healing, protection and prevention. But African genius went beyond prevention and healing. It also pictured both diagnosis and diseases. Within the group of mask representations that heal or protect against disease in Africa, the method and usage vary according to the cultural group. The specific meaning of some African masks is expressed through the representation, itself, of the disease and the method used to eradicate pathologies. The physical deformities depicted in masks are clearly seen and constitute a notable series of visual culture.
Images of deformation represent the negative forces or evil spirits that intervene when moral values are transgressed. These representations show debilitating symptoms such as facial paralysis or the destruction of the nose or face caused by such diseases as leprosy, syphilis, cancer, and framboesia. 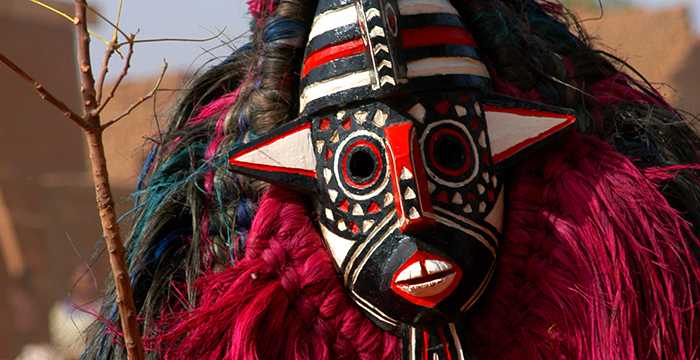 One example of a disease-representing mask is that of the Kwilu and Lwange ethnic groups (D.R. of Congo) called Mbangu. This shows a facial deformity. It is bi-coloured and asymmetric. The mask has one good side that is white and another that is black and deformed with a crooked nose and mouth and signs of smallpox near the eyebrows. The facial burn scar of this mask identifies it with the symptoms of epilepsy and describes a person who has had an attack of epilepsy. Symbolically, the remedy for this sickness comes from the opposition represented by the black and white colours of the mask. The pure white of kaolin powder is used during the healing ritual and the black colour symbolises witchcraft and the sickness the ritual is meant to heal.
This is also the case with the mask of the hunter who has been suddenly struck by facial paralysis, probably caused by the evil eye cast by a witch doctor. It may also be the evil eye of a rival who, out of envy, inflicts sickness on his enemy.

The one who wears the Mbangu mask dances with an arrow in his hump. At the same time both prey and hunter, the dance arouses the desire to hunt down the witch doctors and those who have done him harm. The words of his song invite the listeners to practise tolerance since nobody is safe and the sickness can strike at any time. The dance of the Mbangu incites the individuals to reconsider their attitudes towards their own misfortunes as well as towards the sicknesses of others.
Two masks of the Songye ethnic group (better known as Basonge), who also live in the D.R. of Congo, are identified as Kifwebe. These masks have supernatural healing powers. During the healing ritual, the diviner keeps the mask turned towards the patient while he struggles with the sickness, forcing it into the fire.

Among the southern Bwa peoples in Burkina Faso, large wooden plank masks are carved to represent various flying spirits that inhabit the natural world. These spirits, though largely invisible, are associated with water and can take physical form as insects that gather around a pool after a heavy rain or as a large waterfowl, like an ibis. Some Bwa describe a mythological encounter in which a flying spirit appeared before a human, offering protection and service. The Bwa mask is believed to possess supernatural forces, which act to benefit the community.

In Nigeria in 1975, in the village of the Izzi, an oracle had ordered a woman to wear a helmet-mask called Ogbodo Enyi. The woman had to wear it several times a year to ward off an epidemic that would have caused hundreds of deaths of children. The spirits of the ancestors, incarnate in the mask, see to the welfare of the people. 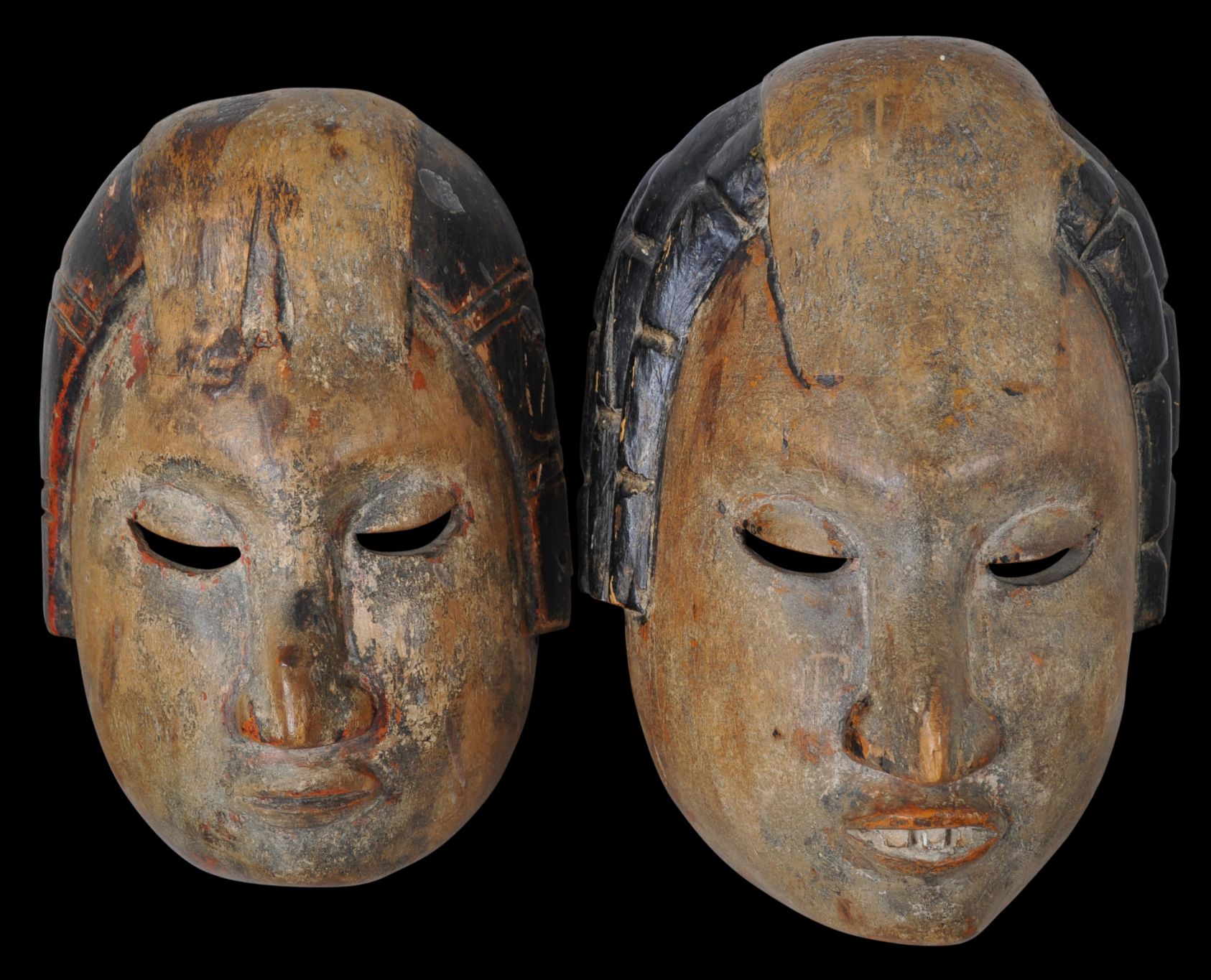 In the Ibibio ethnic group (South-East Nigeria), there is a vast corpus of representations of masks related to sickness. These masks picture some diseases such as deforming rhinopharynitis (known as gangosa), as well as facial paralysis (gangrenous stomatitis), tumours and leporine lip.
The patients take the name of the pathological deformity. They are called “No nose”. The secret society called Ekpo which holds political, judiciary and religious power, is the depository of these repugnant masks known as sidiokekpo. Each year, these masks commemorate the ancestors.
The pleasant-looking masks represent the good ancestors, who can help their descendants, while the sidiokekpo symbolise the reincarnation of the immoral ancestors. Dressed in black raffia costumes, the masked men carry weapons and dance irregularly and aggressively. They cause much destruction.

The moral obscurity of some ancestors is reflected in the voluntary deformities of the masks which illustrate the devastation caused by diseases such as leprosy. Their purpose is to reflect these anti-social behaviours. The masks are not used to frighten away demons but to remind the public of what can happen if they do not keep the rules. The masks that are black and grotesque, ugly and distorted represent people who died violent deaths (the socially undesirable: those who were murdered or committed suicide, people who stole sacrificial objects, people who were executed for a crime, or those who died without relatives). These rebel spirits are destined to wander endlessly, with no shelter for the night. They are known as Idok Ekpo or souls of the damned since they may inflict disease or misfortune on those who depart from the right way.These masks belong to a category of rare and most ancient masks: the Aribo masks are the product of refined artistry.

They show a face adorned with two lumps carved under the chin. These masks are proper to the Idoma ethnic group and are said to have originally had a curative role for women suffering from this disease before they more recently assumed a rather playful character. 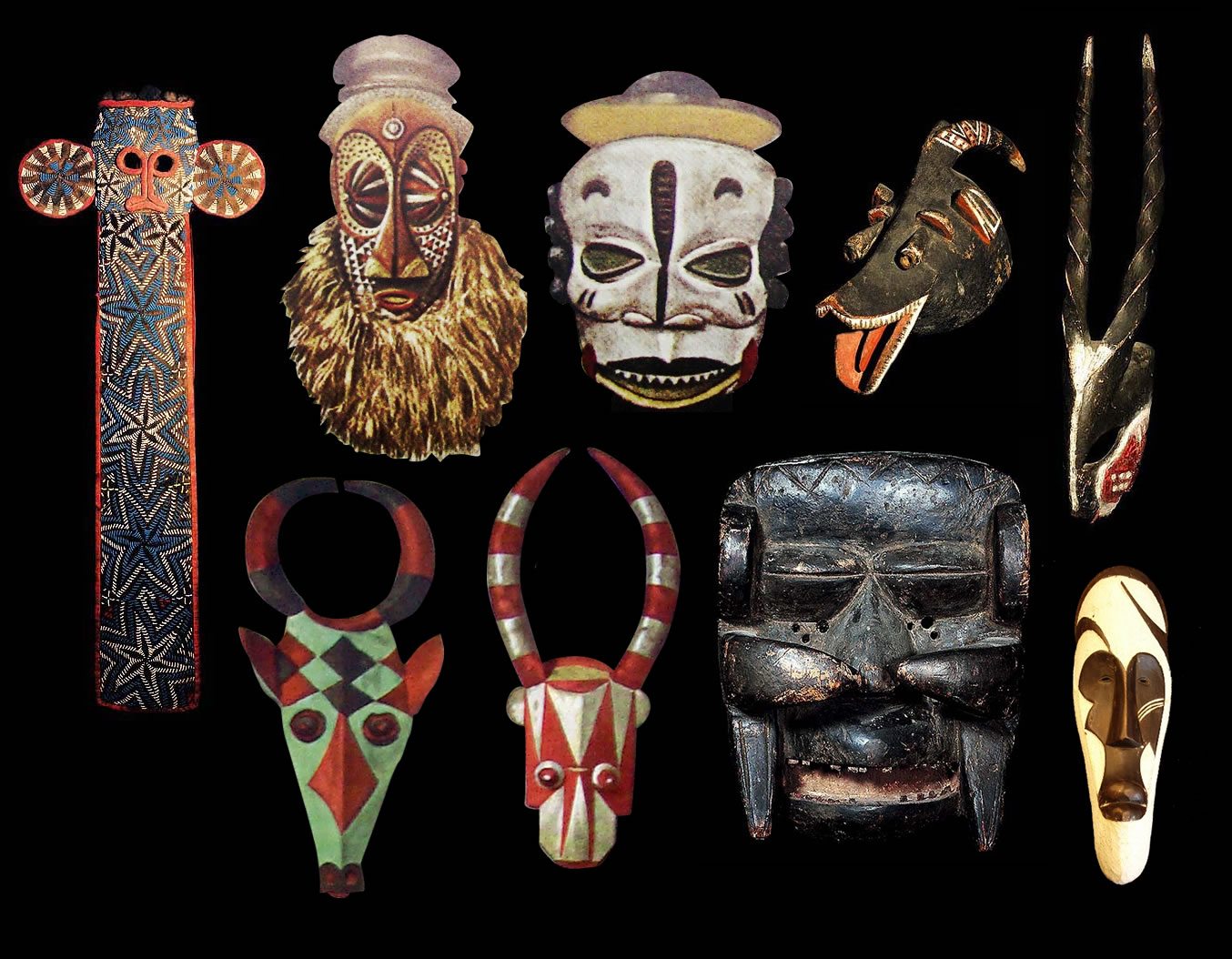 Why Africans are loving crypto

When Will 5G Be Fully Available In Nigeria?

Impact of online gambling in the Nigerian Economy