Botswana Gambling Authority is optimistic that by the end of the first quarter of 2020 they would have awarded the license for the operation of the national lottery.

Addressing members of the media on Friday, Botswana Gambling Authority Chief Executive Officer Thuli Johnson said the process was delayed by the litigation by one of the bidders who applied for an interdiction, restraining the authority from proceeding and/ or accessing and processing the lottery license.

The bidder Ad Infinitum Lottery (PTY) Limited won the appeal at the arbitration and was allowed to submit some of the documents which were initially denied by Gambling Authority. Johnson said the company won’t suffer any prejudice from the authority as the evaluation is being done by an independent committee which they have outsourced and that there is an Oversight Committee.

Johnson indicated that the authority after satisfying itself that the License Application Evaluation and RFA process was conducted properly will announce the preferred bidder and a reserve bidder.

On why they have a reserve bidder, the gambling boss explained that before the award of the license, the Authority Management will negotiate through powers delegated by the Board to Management, the license to be awarded with the preferred bidder and if necessary thereafter the reserve bidder. “The Board will make the final award after the conclusion of license negotiations with the successful bidder,” he explained.

One of the responsibilities of the Gambling Authority is issuance of the casino licences and ensuring compliance by the operators. Johnson revealed that for the financial year under review, the casino sector employed a total of 231 employees. This he said is a single digit decrease in number of employees during the financial year 2017/18 which accounted for 237 employees.

One of the concerns for the Gambling authority is the illegal gambling where gambling machines were made available to the public illegally. Some of the locations where investigations were carried out include Francistown, Tonota, Mandunyane and Mathangwane. 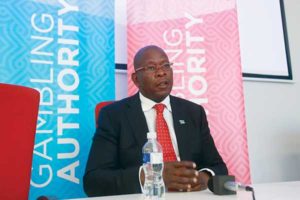 According the gambling authority, their investigations revealed that indeed there was illegal gambling that had taken place at these locations but the perpetrators removed the machines before law enforcement officers arrived. In 2018 when appearing before the Committee on Statutory Bodies and State Enterprises Gambling Authority CEO Johnson revealed that since 2015 they have been collecting P38 millions of levies but don’t have fund order. Addressing the issue, Johnson said that there is a progress in establishing the fund as they have received fund order draft from Attorney General Chambers.

Currently they have collected over P80 million in casino levies, penalties and responsible gambling contributions.

In the current financial year they have managed to collect P26 million with Grand Palm contributing 48% of the casino levies collected followed by Avani at 36%.

Exploring betting and gambling in Botswana

Land Based Casinos in Botswana

Botswana is viable for gambling business 2020