Native Virgin Islander Casper Holstein, somewhere in the 1920s, had more than $2 million, even though some records suggest it could be higher. Whatever the actual figure, Holstein was for many years a wealthy businessman in Harlem.

Despite earning his riches from illegal gambling services, he was loved by many, especially people in African-American communities because he used his resources to support the poor and needy, including those back home in the Virgin Islands.

Born Egbert Joseph on December 7, 1876, in Christiansted, St. Croix, Danish West Indies, now known as the U.S. Virgin Islands, Holstein and his mother moved to New York in 1894. He lived in Harlem and attended high school in Brooklyn.

After graduation, he joined the U.S. Navy ahead of the Spanish-American war and served on the U.S.S. Saratoga. After the war, he worked as a janitor and a doorman before landing a job as a messenger on Wall Street.

Gradually, he rose to become head messenger at a big brokerage house and soon, he became familiar with the stock market. Holstein started studying the numbers system, which was then described as “an illegal lottery often played by impoverished New York City residents.”

Soon, Holstein created his own lottery called Bolito and by 1920, he had become well-known in the New York underworld as the “Bolito King.” 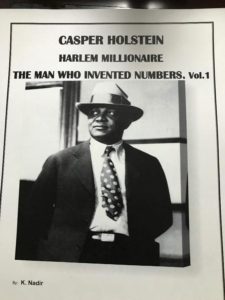 Helping to resurrect illegal gambling in Harlem, sources say his game “was a private lottery, where players would pick a three-number combination. Holstein paid out 600 to one, while the real odds of any number were 999 to one.”

With a steady profit, he became a wealthy man, and lived extravagantly; he had two Harlem apartment buildings, expensive cars, a Long Island home, and thousand acres of Virginia farmland.

But he didn’t enjoy his illicit earnings alone as he donated to humanitarian causes. He helped students with their tuition, gave food baskets to the needy and financed dormitories at Southern black colleges.

Eventually, Holstein became the owner of numerous businesses, earning about $12,000 a day at his peak. The New York Times said he became “Harlem’s favorite hero because of his wealth, his sporting proclivities and his philanthropies among the people of his race.”

But in 1928, at the height of his success, Holstein was kidnapped and beaten by five white men who demanded $50,000 ransom. They released him three days later with no ransom paid. When the kidnappers were caught by the police, Holstein said he didn’t recognize them, even though he later told reporters that he knew them but kept quiet due to business reasons.

Later, it emerged that New York gangster Arthur “Dutch Schultz” Flegenheimer was behind his kidnapping. The white mobster was aiming to take over the city’s numbers racket, and he did succeed. 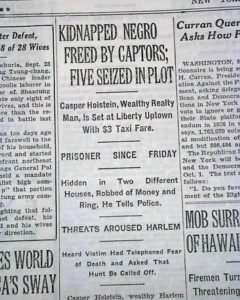 With the help of some corrupt police officers, Flegenheimer took out competitors, including black operators like Holstein from the numbers business. In 1935, however, Flegenheimer was gunned down by fellow gangsters. That same year, Holstein was arrested for illegal gambling and served three years in prison.

Upon his release, reports said he “lived in obscurity” and spent the rest of his life supporting various charities. Holstein passed away in Harlem on April 5, 1944, some months before the second world war ended.

In Geraldo Guirty’s 1989 book Harlem’s Danish American West Indies, 1899-1964, Holstein was said to have written the following in 1935, the year he was arrested:

“We cannot enjoy half slavery and half freedom. We want it all or nothing. We don’t want to be revolutionists; we don’t want to be communists, we don’t wish to be branded against organized government. We want to be the same as every member of this American nation, and we are entitled to that privilege. I am told you cannot oppose government, but by God government can hear us cry, and must hear us protest and we are going to protest until we get the form of government we wish.”