There isn’t a single face exposed in the cavernous Galaxy casino. Everyone is wearing a mask, including the croupiers, waitresses and security guards — who happen to vastly outnumber the scattered customers gambling at blackjack and roulette tables.

Visitors only momentarily drop their masks at the entrances to the casino, to pose for thermal cameras on the lookout for the deadly Wuhan coronavirus that has killed hundreds of people in mainland China and infected thousands more. The outbreak has left the free-wheeling, semi-autonomous Chinese territory of Macao shell-shocked. 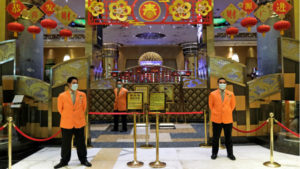 According to the Macao government, January tourism figures plunged 87% compared to the previous year, even though the busiest holiday of the year — Lunar New Year — fell in that period. Hotels that were nearly at 100% capacity during the 2019 Lunar New Year were left half empty. The health scare has threatened the business model at the heart of Macao’s economy. The unofficial gambling capital of the world depends on millions of visitors from mainland China.

But now administrators are trying to ensure that the deadly new coronavirus first discovered last December in the Chinese city of Wuhan does not take root in this tiny former Portuguese colony.
n January, police went from hotel to hotel, rounding up hundreds of visitors from Hubei province, where Wuhan is located. Each person was given a choice: either go home or go into quarantine for two weeks.

As of February 1, the dragnet had failed to track down more than 100 tourists from the region.

At that briefing, 11 officials from the city government sat wearing masks, addressing a room full of journalists who had been instructed to also cover their faces.
Ao Leong Lu, Macao’s secretary for social affairs and culture, urged residents to avoid gathering in large numbers. Her administration also announced schools would be closed indefinitely.

“I never saw this in my life and I’ve been here since 1981,” – Albano Martins, an economist who worked in the city’s administration when it was still a Portuguese colony, told CNN.

He warned that Macao faces a major threat to its economy: “If this effect still continue for two, three months more, we may have a two-digit contraction.”