With the country nearing the end level 5 lockdown, a lot of selling had been going on for a lot of time, when it shouldn’t have. The lottery is not classified as an essential service and tickets may not be sold during the Covid-19 lockdown, Trade and Industry Minister Ebrahim Patel said during a media briefing on Saturday.

Despite the restriction on ticket sales, Ithuba went ahead with a massive R228 million PowerBall and PowerBall Plus jackpot draw on Friday night, and the draw also took place on Saturday night for the Lotto. Friday was the biggest lottery jackpot since 2015 and the fourth biggest since the lottery was launched in South Africa almost two decades ago.

Patel, who has oversight over the lottery, said he had told officials from his department to instruct the National Lotteries Commission (NLC) to issue a statement “clarifying that [the sale] of Lotto tickets is not permitted during this period”. GroundUp reported on Friday that while all other in-person forms of gambling had been stopped because of the stringent lockdown regulations, the sale of lottery tickets by retail outlets was continuing. Patel was responding to a question about why the sale of lottery tickets was still permitted.

A statement issued by NLC spokesman Ndivuho Mafela on 3 April indicated that there was an exemption allowing the sale of lottery tickets during the lockdown.

“As the regulator of the National Lottery, the NLC has taken note of the Presidential lockdown directive and, as such, has activated an exemption clause on lottery play in South Africa,” Mafela said in the statement.

Specific questions about this exemption sent to Mafela, Ithuba spokesperson Busi Msize and DTI Trade and Industry spokesman Sidwell Medupe prior to the publication of Friday’s story were ignored by all three of them. But Patel’s response during the media conference cast doubt on whether the NLC had applied for — or been granted — an exemption on lottery ticket sales.

Patel said it had been brought to his attention on Friday that there were “claims” that lottery tickets were being sold.

“I had asked my officials to make it very clear to the NLC that they needed to issue a statement clarifying that Lotto tickets are not permitted in this period,” Patel said. 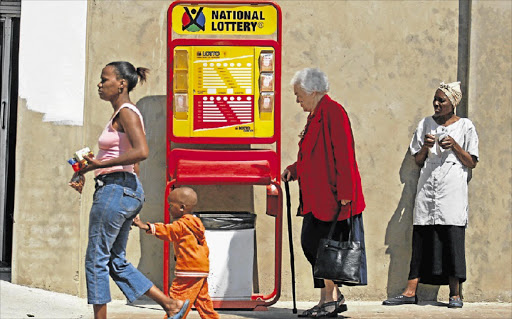 For the past few weeks, both the NLC and Ithuba have actively promoted online ticket sales, via the lottery’s own app and banking platforms.