E-play Africa has once again come up with a single life blackball billiard championship in Uganda. The online gambling portal has organized yet another pool championship since last year where the elite pool players in Uganda have been given an opportunity to battle for 1MILLION Uganda shillings for the winner, the event is dated on the 12th and 13th of June 2021 at Amigoz pool Arena Kansanga, Kampala Uganda.

Following the recent organized billiard championships where top seeded pool players have been showing their best at the table E-play has come up with a single life tournament for the players to show their best without being given a second chance like for the last double elimination championships which has been taking play in the pool fraternity where a player is given a double life once a player losses the first life, He/she can still come back in the second life winner of the championship.

This was seen in the first ever double life pool championship which was organized at Upper Volta Pool Arena where the former E-play billiard champion also top seed player in Uganda a one Ssejjemba Ibrahim after losing his first life came back in the second life and won a young blood player a one Bwanika Gideon which made him through to the finals with the reigning national champion in Uganda a one Bwanika Mansoor who had not lost to any player in the tournament, Ibrah won the championship after winning to Mansoor at the finals which later caused confusion among the players funs wondering how Mansoor who unbeaten in the championship up to the finals was later in the second place and Ibrah was the champion. 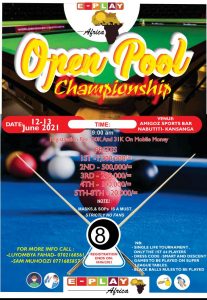 The e-play Africa billiard championship 2021 is set to run for two days with a number of 64 participants who will be racing to 4games ( best of 7flames ) in the first and second round and later from the round of 16 number of games to race to will rise to enable players to prove their potential on the table. So far some of the elite and top seeded players in the country have confirmed there presence in the championship among of them is the Seed number one of Uganda known as SSEJJEMBA IBRAHIM also known as Mayweather who is also the defending champion of the last championship.

NOTE: Players will be battling for 2million Uganda shillings in total and registrations are ongoing up to 10th of June where the draws will kick off in the afternoon, All players are argued to carry their own playing tools to the venue and expected to keep time in order to avoid walkovers.

Due to the current situation of Covid19 face masks are a must and observations of the SOPs set by the Ministry of Health.

1 thought on “E-play Africa is back with the mid year billiard championship in Uganda.”