Poker is one of the most popular card games nowadays, but it went through a lot of changes since its birth in the 19th century. Texas Hold’em is the most well-known version of the game now but what about other variations? How has the game changed during the centuries? Let’s find the answers in our summary about the evolution of poker games.

There are lots of arguments about the origins of poker, though most people agree that it was born in the US in the 19th century. It rapidly became popular all over the country and later in the whole world thanks to major tournaments and TV broadcasts. When we talk about poker, most of us think about Texas Hold’em as usually what is played in these tournaments. But there are dozens of other variations of poker, like five-card and seven-card studs, but Omaha and Caribbean stud are also popular games. Thanks to online poker sites millions of people play the game every day so poker will be with us for sure in the next decades as well.

Evolution of Poker Games: The Beginning
Different card games were already played as early as the 15th century, but modern poker was born later. Some people believe that its origin goes back to France, where it was a variation of the game called poque. But earlier games like brag in England and pochen in Germany also had bluffing and betting elements.

While others think that a Persian game called As Nas could have been the first version of poker. It was very similar to the Five-card stud and Persian sailors could have taught it to French settlers in New Orleans. But most experts of the evolution of poker games think that poker was played first along the Mississippi River by American settlers.

Getting popular
Anyway, one thing is sure, poker in its current form appeared in the 1830s in the US. As there is a reference to it in an English actor’s memoirs from 1829. He wrote that a game was played with a pack of cards with five cards for each player. And they bet on who had the best five-card combination. 52-card decks were used from the 1850s, while flush and draw were also introduced. 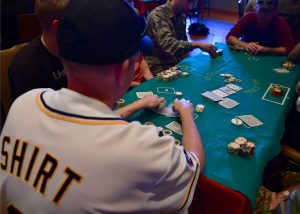 Poker variations like stud poker and split-pot poker were born during the American Civil War. While American soldiers popularized the game in Europe during the First World War. In the 1920s, community card poker games also appeared. In these games, two cards were dealt to players while five cards were dealt face-up in three different stages. Sounds familiar? Texas Hold’em was born which was a huge step in the evolution of poker games.

The rising popularity of Texas Hold’em
After its first appearance in a place called Robstown, Texas in the 1920s, Texas Hold’em wasn’t too known until the 1960s. Then a Texan called Felton McCorkindale brought it to the Golden Nugget Casino in Las Vegas where it became more and more popular. The first Texas Hold’em tournament was held at the more prestigious Dune casino in 1969, attracting professional players as well.

But the biggest step in poker’s history was the foundation of the World Series of Poker tournament in 1970. Texas Hold’em was the main event in the series which helped to popularize the game all over the country. Just like the appearance of the first video poker machines in the same decade, based on five-card draw poker rules. You can still find some of these poker video games on online gambling sites. In the 1980s, Irish bookmakers introduced the game in Europe following their trips to Las Vegas. So soon the game was played all over the world, and it was just the beginning.

Poker has become a worldwide phenomenon
Poker’s major boom happened with the appearance of online poker sites and in several other countries. These sites have allowed amateur players to compete at home and win huge amounts of money. While with some online poker games players could even win a place in real tournaments. Like it happened with Chris Moneymaker who won the 2003 WSOP after qualifying through an online event. The winners of the biggest poker tournaments are real stars now and known worldwide thanks to the television broadcast of these events.

Texas Hold’em took over the most popular poker game title from seven-card stud though it’s still part of the tournaments. Just like Omaha, HORSE, and 5-card stud. Several films, series, and music videos have also featured poker, making it popular among the younger generation. Rounders, Casino Royale, and Maverick are just a few to mention, but even the crew of the USS Enterprise played poker in the popular Star Trek series.

What’s next?
Well, poker can even become an Olympic sport. At least that’s what the International Match Poker Federation (IMPF) is aiming for. Match Poker is the sports version of No-Limit Texas Hold’em with teams of four players competing against each other. Instead of chips, they receive points with every win which are added together to form an overall ranking. There are 50 poker federations working together with the IMPF. While Match Poker has been recognized as a world mind sport like chess and bridge.

We might need to wait a couple of more years to see poker players at the Olympics, but it won’t change the game’s ever-increasing popularity. With more and more professional players choosing to teach online, players can improve their skills easily. While online games developers also come out with better and better versions, using virtual and augmented reality. Ensuring that poker remains one of the most popular gambling games of our time.