The crowning event for the eighth edition of the Fortebet Real Stars Sports for the month of February was successfully held on Monday at the Copper Chimney Restaurant, Lugogo in Kampala.

The awarded disciplines included Boxing, Swimming, Rugby, Athletics, and Football that had the coaches and players categories.

He punched his way to the 2020 Tokyo Olympics through a box-off card during the Africa Olympic qualifiers that were held in Dakar, Senegal in February.

Bwogi stood out as the only Ugandan that automatically qualified for the Olympic Games in Tokyo from the 13 boxers that represented Uganda in the qualifiers. 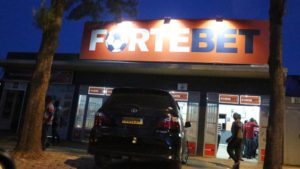 At the championship, Namutebi won two gold medals in 100 Freestyle and 50 Freestyle before picking up two bronze in the 50 Backstroke and 50 Butterfly plus a Silver in the 50 Breaststroke style. Namutebi saw off stiff competition from fellow swimmers Avice Meya and Alex Kituuka.

Ssentongo scored a total of seven goals last month, six in the league and one in the Cup, adding two assists and two man of the match performances to his statistics.

He beat Kenyan Rhonex Kiprutoʼs previous record of 13min and 18 seconds which was set in January in Valencia, Spain. Cheptegei beat Juliet Chekwel who won the Zurich Marathon to set the new national record in the womenʼs Marathon.

Heathenʼs Aaron Ofoyroth also starred in the Rugby category walking away with the gong. Despite being absent for five league games at home, he has been a main pillar in the Rugby Sevens National Team double outings of Viña del Mar in Chile and Montevideo in Uruguay in the World Rugby Sevens Challenger Series, a primary new qualification format of the HSBC World Rugby Sevens Series. Ofoyroth finished the South America tour with 38 points including three tries against Paraguay, one against strong Germans and Brazil.

Uganda managed to finish 7th out of the 16 teams, qualifying for the second and last HSBC World Rugby Sevens Series qualifier to be held in Hong Kong this October. Ofoyrwoth beat competition from teammate Joseph Oyet and Kobsʼ Daudi Semwami who were also competing for the same recognition.