After spending several months with gamblers in Kenya, Mario Schmidt finds that many people see their activity as a legitimate attempt to make a living in an economy that does not offer stable employment.

Gambling can be seen as an act against the economy, Schmidt argues, in which wealth is not based upon merit but accumulated in a non-transparent way through corruption, inheritance and theft.

In the period from June to August 2019 Kenyan gamblers have been hit by a wave of shocking news. Only a couple of weeks after Henry Rotich, Kenya’s National Cabinet Secretary, proposed a 10% excise duty on any amount staked in betting in order ‘to curtail the negative effects arising from betting activities’, the Kenyan government decided to shut down several betting companies’ virtual mobile money wallet systems because of alleged tax evasion. As a consequence, gamblers could no longer deposit or withdraw any money.

This double attack on the blossoming betting industry has forerunners both in Kenya as well as elsewhere. Revolving around the capitalist conundrum to realign the moral value of hard work and the systemic necessity to make profit, states tend to combine moral attacks on gambling (see the case of Uganda) with attempts to raise revenues. The vice of gambling turns into a virtue as soon that it raises revenue for the state.

It is also gambling’s allegedly vicious character which made possible that the term became a prime metaphor and diagnosis for the excesses of finance capitalism as well as for the pitiful status of the economies of neoliberal Africa characterised by rampant inequalities. Social scientists, politicians as well as journalists portray the latter as a place where ‘gambling-like speculation and entrepreneurialism replace labour’ and the ‘magical allure of making money from nothing’ has seized the imagination of a vast majority of the population. Faced with a dazzling amount of wealth showcased by religious, economic and political leaders alike, young and unemployed men increasingly put their hopes on gambling. Trying to imitate what they perceive as a magical shortcut to unimaginable wealth, so the story goes, they become foolish puppets of a global capitalist system they often know little about and have to face the dire consequences of their foolish behaviour.

After spending several months with gamblers both in rural as well as urban Kenya, I can only conclude that this story fails to portray reality in its complexity. While it is undeniable that some gamblers attempt to imitate the acquisition of a form of wealth that they perceive as resulting from a quick-to-riches scheme, a considerable number of Kenyan gamblers do not. In contrast, they portray and enact gambling as a legitimate and transparent attempt to make ends meet in an economy that does not offer them any other stable employment or income. Narratives about betting leading to poverty, suicide and alcoholism neglect the fact that the majority of young Kenyan gamblers had already been poor, stressed and under extreme economic pressure before they started gambling, or, as a friend of mine phrased it succinctly: ‘If I don’t bet, I go to bed without food every second night, if betting does not go well, I might sleep without food two days in a row. Where’s the difference?’ Gambler’s betting activities thus cannot be analysed as a result of a miserable economic situation alone.

This perspective clearly mutes the actors’ own view of their practices. They see betting as a form of work they can engage in without being connected to the national political or economic middle class or elite – that is, without trying to enter into opaque relationships characterised by inequality. In other words, I suggest to interpret gambling as directed against what gamblers perceive as a nepotistic and kleptocratic state capitalism – an economy in which wealth is not based upon merit but upon social relations and where profit and losses are distributed in a non-transparent way through corruption, inheritance and theft. 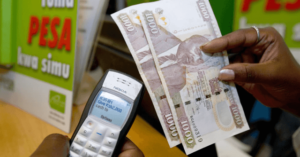 Before I substantiate this assumption, let me briefly offer some background information on the boom of sports betting in Kenya which can only be understood if one takes into account the rise of mobile money. The mobile money transfer service Mpesa was introduced in 2007 and has since changed the lives of millions of Kenyans. Accessible with any mobile phone, customers can use it to store and withdraw money from Mpesa agents all over the country, send money to friends and family members as well as pay for goods and services. A whole industry of lending and saving apps and sports betting companies has evolved around this new financial infrastructure. It allows Kenyans to bet on sports events wherever they are located as long as they possess a mobile phone to transfer money to a betting company’s virtual wallet. Gamblers can either bet on single games or combine bets on different games to increase the potential winning (a so-called ‘multi-bet’). Many, and especially young, male Kenyans, indeed bet regularly.

According to a survey I conducted last November around a rural Western Kenyan market center 55% of the men and 20% of the women have bet in the past or are currently betting with peaks in the age group between 18 and 35 (sample size 111). This resonates with a survey done by Geopoll estimating that over 70% of the Kenyan youth place or have placed bets on sport events.

Put differently, the gamblers I interacted with understand their betting activities as directed against a non-reproductive and kleptocratic capitalist state whose true nature has been, according to my interlocutors, once more revealed by Rotich’s proposal to tax gambling. Two of my ethnographic observations can illustrate and substantiate this claim, the first being a result of paying close attention to the ways gamblers speak and the second one a result of observing how they act.

Spending my days with gamblers, I realised that they use words that are borrowed from the semantic sphere of cooking and general well-being when they talk about betting in their mother tongue Dholuo. Chiemo (‘to eat’), keto mach (‘to light the fire’), mach mangima (‘the fire has breath’, i.e. ‘is alive’) and mach omuoch (‘the fire has fought back’) are translations of ‘winning’ (chiemo), ‘placing a multi-bet’ (keto mach), ‘the multi-bet is still valid’ (mach mangima) or ‘the multi-bet has been lost’ (mach omuoch). This interpenetration of two spheres that are kept apart or considered to be mutually exclusive in many descriptions of gambling practices sparked my interest and I began to wonder what these semantic overlaps mean for a wider understanding of the relation between gambling and the ways in which young, mostly male Kenyans try to make ends meet in their daily lives. 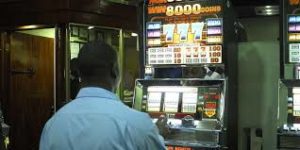 While accompanying a friend of mine on his daily trips to the betting shops of Nairobi’s Central Business District, I realised that the equation between gambling and reproductive work, however, does not remain merely metaphorical. Daniel Okech, a 25-year-old Master of Business Administration worked on a tight schedule. When he did not have to attend a university class during the mornings, which he considered not very promising anyway, with his many well-educated but unemployed friends in mind, he worked through websites that offered detailed statistical data on the current and past performances of football teams and players. These ranged from the English Premier League to the third football league of Finland. He engaged in such meticulous scrutiny because he considered the smallest changes in a squad’s line-up or in the odds as potentially offering money-making opportunities to exploit. Following up on future and current games, performances and odds was part of Daniel’s daily work routine which was organised around the schedules of European football leagues and competitions. The rhythm of the European football schedule organised Daniel’s daily, weekly and monthly rhythms as he needed to make sure to have money on the weekends and during the season in order to place bets.

Despite the fact that betting is based upon knowledge, habitual adaptations and skills, it rarely leads to a stable income. With regard to the effects it has, betting appears to be almost as bad as any other job and Daniel does not miscalculate the statistical probabilities of football bets. He knows that multi-bets of fifteen or more bets combined rarely go through and that winning such a bet remains extraordinarily improbable. What allows gamblers like Daniel to link betting with ‘work’ and the ‘reproductive sphere’ is not the results it brings forward. Rather, I argue that the equation between the ‘reproductive sphere’ and betting is anchored in the specific structure between cause and effect the latter entails. What differentiates gambling from other jobs is the gap between the quality of one’s expertise and performance and the expected result. 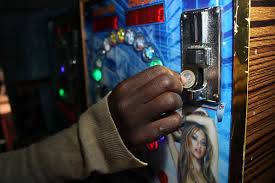 For young men in Nairobi, one could argue, betting on football games is what planting maize is for older women in arid areas of Western Kenya during the era of global climate change: an activity perfected by years of practice and backed up by knowledge, but still highly dependent on external and uncontrollable factors. Just like women know that it will eventually rain, Daniel told me that ‘Ramos [Sergio Ramos, defender from Real Madrid] will get a red card when Real Madrid plays against a good team.’ For young men who see their future devoid of any regular and stable employment betting is not a ‘shortcut’ to a better life, as often criticised by middle-class Kenyans or politicians. It is rather one of the few ways in which they can control the conditions of their type of work and daily work routine while at the same time accepting, and to a certain extent even taming, the uncontrollability and volatility of the world surrounding them.

Gamblers do not frame their betting activities in analogy with the quick-to-riches schemes they understand to lie behind the suspicious wealth of economic, political and religious leaders. With regard to the entailed cause and effect relation, betting constitutes a negative of the economic activities of the Kenyan elite. While religious, economic and political ‘big men’ owe their wealth to opaque and unknown causes, gambling practices are based upon a rigid analysis of transparent data and information. While betting revolves around known and controlled causes that have no effects, the wealth of Kenya’s elite is a suspicious effect caused by unknown forces. By establishing links between their own life and knowledge, on the one hand, and football games played outside the influence of Kenyan politicians and businessmen, on the other, gamblers gain agency in explicit opposition to the Kenyan state and to nepotistic relations they believe to exist between other Kenyans.

It is thus unsurprising that, in the context of the betting companies’ alleged tax evasion, many gamblers have not yet repeated the usual complaints and grievances against companies or individuals that are accused of tax evasion or corruption. While some agree that the betting companies should pay taxes, others claim that due to the corrupt nature of the Kenyan state it would be preferable if the betting companies increase their sponsoring of Kenyan football teams. No matter what an individual gambler’s stance on the accusation of tax evasion, however, in the summer of 2019 all gamblers were united in that they eagerly waited for their virtual wallets to be unlocked so they could continue to bet against the state.