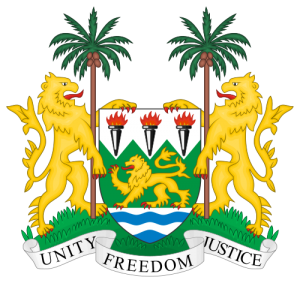 Sierra Leone is a country in West Africa, on the Atlantic Ocean. It’s known for the white-sand beaches lining the Freetown Peninsula. The capital city, Freetown, commemorates the nation’s slave-trade history with the Cotton Tree landmark and King’s Yard Gate. Both were known as places of refuge for returned slaves in the 18th and 19th centuries. Nearby Bunce Island was a key departure point during the slave trade.

BRIEFLY ABOUT THE ECONOMY OF SIERRA LEONE

rivate capital dominates mining concerns, commerce, and banking. European, Lebanese, and Indian interests are predominant, and participation by Sierra Leoneans is limited. Various inefficient parastatals were privatized in the 1980s and ’90s

There were growing economic difficulties in the 1980s, including a heavy external debt burden, escalating costs of food and fuel imports, and erratic mineral-export production. Substantial devaluations of the national currency, the leone, also occurred, and a series of economic stabilization programs supported by the International Monetary Fund were initiated to address these problems. Foreign investment, which centred on the mineral sector, declined drastically after the start of the civil war in 1991. Bauxite and rutile mines, the producers of most of the export earnings, closed in 1995. By the time the war ended in 2002, much of the formal economy had been destroyed, and the government was faced with the arduous task of rebuilding the country’s economic infrastructure.

The Bank of Sierra Leone is the country’s central bank; it issues currency (the leone), maintains external reserves, and acts as banker and financial adviser to the government. The National Development Bank is charged with providing finances to investors within the country. The Sierra Leone Commercial Bank provides credit and technical assistance to farmers. Private commercial banks also exist in the country.

The Sierra Lone casino industry and gambling scene is fairly unregulated, even compared to other gambling markets in poor African developing countries. Casino gambling, lotteries and sports betting is known to be legal in the country. Casino licences are issued by the National Tourist Board of Sierra Leone, though there is no supervision of the gambling activities*.

The Managing Director of the Sierra Leone State Lottery, Charles S. Kamara reportedly stated earlier this year, that they made a request to the government over 6 years ago, calling for the establishment of a national regulatory board, that would control and regulate all betting and casino activities around the country, but the board is not established to date**.

Besides the state lottery and the one single casino in Freetown, the country’s capital, there is only one legal gambling provider in the country, Mercury International. It acquired its license from the government of Sierra Leone on the 1st October 2006 for the provision of a 5/90 lottery and Sports Betting business, including Horse Racing and Dog Racing. The company is also a market leader in Corporate Social Responsibility and donate over Le. 750,000,000 ($166,889) worth of scholarships annually amongst numerous other contributions

There appears to be only one single legal and licensed casino in Sierra Leone’s capital, Freetown, called the Bintumani Hotel and Casino in Aberdeen Hill district.

Online casinos are unregulated and therefore there are no licensed providers of online casino gambling operating in the country. That small portion of locals, who have access to the internet are free to register on foreign online platforms

Online gambling is not regulated and none of the two licensed providers offer their products on an online platform. Foreign betting sites are freely accessible, but their popularity lags far behind their land based counterparts’, due to the extremely low internet penetration rate of the country.

The two companies conducting all legal sports betting in the country also offer lottery products to Sierra Leone residents. The State Lottery company offers 6 types of lottery games, while Mercury international, the only other legal provider runs a 5/90 lottery game in the country.

None of the two companies offer any of their lottery products on an online platform, due to the low internet penetration rates. However, there are no laws restricting playing on foreign online lotteries.