The Ghana Lotto Operators Association is on the brink of war. The body has fired at the government over a scandal in private operators’ licences which they paid but never got.

Ghana lottery operators demanded investigations on the National Lottery Authority (NLA) for allegedly collecting licencing money without issuing permits. They say it took money from private companies under the pretext of licencing them to use NLA drawn numbers. 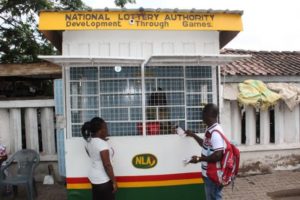 Ato Conduah, lawyer for Ghana’s lottery operators said the NLA collected €165k from 24 operators. €825 each for lotto agents and €300 from lotto writers. Furthermore, another €825k worth of bank/insurance guarantees from operators who intended to operate nationwide.

Razak Kodwo Poku, Public Relations Officer of the NLA, denied such accusations. He said that levies collected from the Ghana lottery operators were legal. Moreover, he said they intended to register them and issue licences to legitimate business in the industry.

However, Mr Conduah insisted in his claim and criticised the NLA.

“The action that saw levies being collected from operators so they could get licences has been found to be a hoax. Designed to fleece them of their capital, seize their legally-acquired drawing machines for VAG Lotto with the intention of making them bankrupt permanently.”

History of the NLA

The NLA was originally established as the Department of National Lotteries in 1958 to organize raffles to entertain the Ghanaian people and give them the opportunity to win mouth-watering prizes.
The Lotto and Betting Act 94 had been passed into law by 1960 to begin and regulate lottery in Ghana and generate revenue to support the development of Ghana which had just gained independence from colonial rule only three years earlier. The subsequent fifty years would be the years when NLA would grow exponentially and evolve into an autonomous public service institution, out of its earlier incarnation as Department of National Lotteries (DNL). This evolution came along with the promulgation the National Lotto Act 722 in 2006 which birthed the National Lottery Authority.