Among all the African countries, South Africa is arguably the first when it comes to modernization and civilization. The country has it all, whether it is recreation, transport and other sectors of the economy. The best destination where you can find the best steaks and finest wine is South Africa, not forgetting the best parks for wildlife and jumping sites.

While this country seems to be the perfect destination for tourism, there is still more to be done in the terms of gambling. If you are heading to the country to enjoy a bit of gambling, you may not find the perfect laws. That is why we feel the country should amend some sections of the law, especially regarding to online casinos.

In 1673, South Africans were already gambling but when Dutch settlers came into the country, they imposed strict rules against gambling. Later on in 1965, the colonial government then created a Gambling Act which rendered all gambling activities illegal. However, the Act did not include horse racing in the restrictions. From the 1970s, a few casinos began to pop up in areas such as Venda, Transkei and Ciskei, which were basically Bantustans. By then, racist tendencies were highly pronounced, and non native South.

Africans were not allowed to visit the casinos.

The gambling fever continued to spread in the country. By 1995, South Africa had more than 2000 casinos, although operating illegally. Gamblers had a good time playing games and earning money, but the government realized that it was not getting any revenue from this business. So it initiated the licensing procedure to create a formal structure. In 1996, the Gambling Act was amended to have casinos operating only if they were licensed. Besides, the Act established South Africa’s national lottery. Still, horse racing was not affected, so casinos dealing in this sector were not affected. The licensing program had several casinos closing shop. In 2004, the 1996 Gambling Act was replaced by the 2004 Act which subsequently rendered online casino gaming illegal. An Amendment Act was created in 2008 owing to the closure of casinos, and it was aimed at allowing online operators to launch their business in the country. The Gauteng Court negated this amendment, citing lack of support by online operators to the South African citizens. 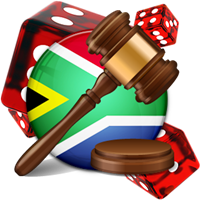 South is striving to meet international standards concerning gambling, but these efforts are marred by conflicting interests from various quarters. For instance, there are people who believe that government should allow online operations and increase the amount of revenue. On the other hand, some officials believe that the country should uphold its traditional values and protect the population.

The law is so strict when it comes to online gambling. For South African residents who are caught indulging in any form of online gambling, they can face imprisonment for 10 years or be charged a fine of 10 million Rand. In extreme cases, you will be slapped with both penalties. Some individuals who were caught gambling on foreign sites had their winnings confiscated and channeled to the treasury trust account.

South Africa is one of the countries in the world where gambling is highly regulated. Online gambling remains illegal while land based casinos continue to operate freely. The South African government may not have realized the amount of revenue that could be generated from online gambling. Given that the African market is growing rapidly, South Africa must come out to explore more opportunities which lie on the online platform. It is just about time and the country will change its laws to tap into this new market.