The island that today makes up the small island nation of Comoros has been conquered and ruled by various groups from the nearby areas including Persians, Indonesia, and Africans.

The Europeans first discovered Comoros in 1505. The Portuguese were the first to visit, but it was the French who colonized the islands starting in 1841 and became a French protectorate in 1886, before being formally adopted as colonial possession in 1912. Comoros was then governed as part of Madagascar until 1947 when they became a separate French Overseas Territory. In 1961 Internal self-government was granted during this it was reported that the customary celebration rituals in Comoros often featured curtains donned, dance, music and jewellery trading for gambling through the tossing of coins. 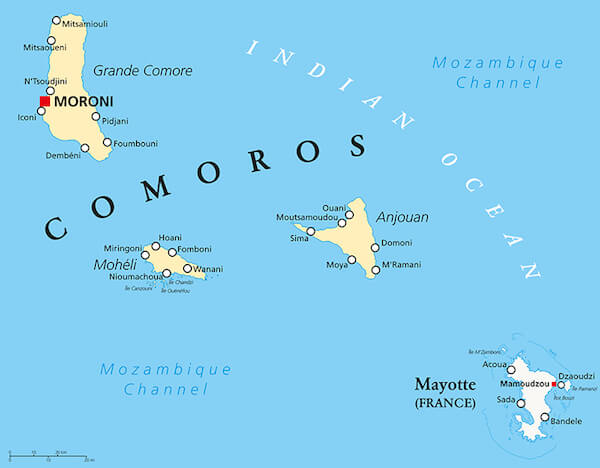 Before the country gained full independence in 1975 from the French, then Ahmed Abdallah was elected as the first president of the Comorian. Still, within months of assuming the leadership of the country, he was overthrown by Ali Soilih, which was then the president. It was the same Ali in 1977 that legalized all forms of land-based gambling authorization in the country. Such as casino games, poker, sports betting and lottery games. Although in 1998 see a new draft law and proposed gambling act to the legislative body of Anjouan this act under the Computer Gambling Licensing Act of 1999 was passed on the Island of Anjouan. This new act allows online gambling companies to operate from within the country as long as they have obtained a gambling licence. At the same time, running gambling establishment in Comoros requires a permit which set at a fixed fee of $USD20, 000.

Knowing full well that Sunni Islam predominately dominates the country, once a company has been granted authorization, any numbers of gambling sites are allowed to operate under the gambling licence issued by the Anjouan Corporate Service LTD. Although, currently there at least more than three land-based casino while more than three online casino operators licensed in Comoros. The law includes casino gambling, sports betting, poker rooms and lotteries.

However, beside Comoros is a predominately dominated Sunni Islam people it is interesting to know that coins tossing during they customary traditions has been around along with jewellery even before it gains its full independence from the French colonial master.