Tanzania, an East African Nation officially called the United Republic of Tanzania faces the Indian Ocean and borders seven other countries Burundi, Kenya, Malawi, Mozambique, Rwanda, Uganda and Zambia. With estimated population of over 50 million residents and 33.05 percent living in urban areas according to 2018 UN report.

Although, gambling in Tanzania is a practice that existed since even before the establishment of formal betting stations, while some sections said people usually placed informal bets whenever the fierce old rivals Yanga and Simba in early 1930s. Though, pool betting and lotteries was the first recorded gambling as it is the only allowed form of gambling in the country, which was previously regulated under the Pools and Lotteries Act, 1967 and National Lotteries Act,1974. In 1985, the government introduces a new economic reform that saw only the national lottery as the only significant gaming activity in the country by then the defunct National lotteries.

Further in 1992 the economic liberalization policy and reform programs and especially the enactment of the National Investment Promotions and Protection Act of 1992, and the 1997 Tanzania Investment Act change the overall landscape in major investments projects, and stimulate leisure and tourism related investment in the country and the continued economic reform gave birth to the formulation of the National Policy on Gaming Activities and subsequently the enactment of the Gaming Act Cap. 41, hence the Gaming Board of Tanzania.

In 2003, the government decided that it needed to regulate this sector more effectively with the enactment of the Gaming Act of Tanzania that established the body, the Gaming Board of Tanzania to oversee the gambling industry, issue licenses to operators and collect taxes from gambling premises. 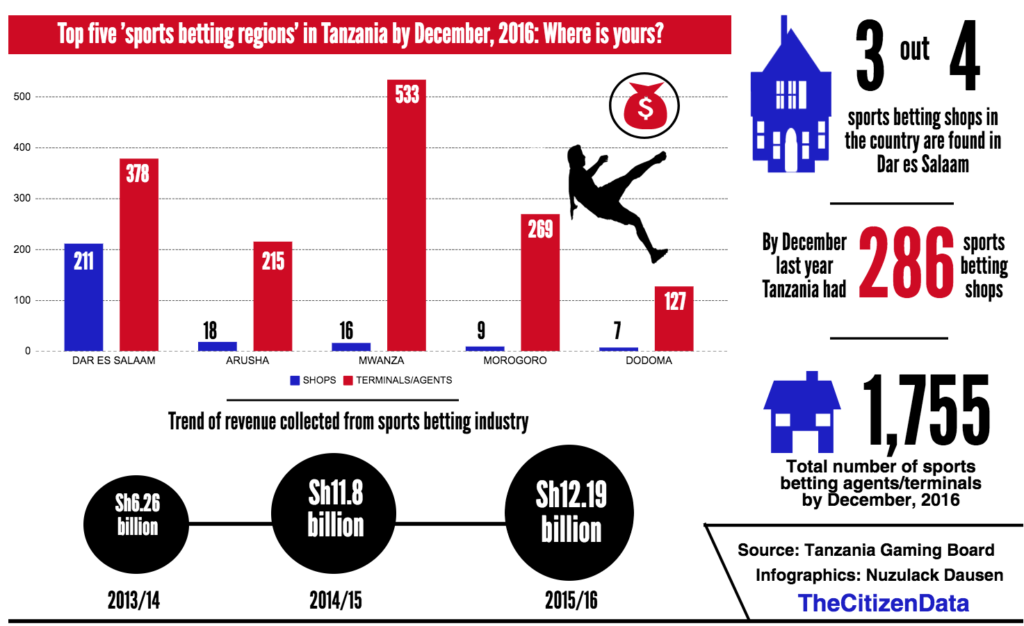 Although, the country has a reputation of being a pioneer in the field of gambling on the African continent, though, all most common forms of gambling is legal in the country includes, sports betting, casino, poker and lottery and its one of the first East African Countries to regulate online gaming in 2012 is Tanzania. In 2012, Internet Gaming Regulations came into being, and the first online gambling site licensed by Tanzanian authorities iplay8casin.com began operating in 2013 and others followed after that.

Finally, in Tanzania sports betting is the biggest particularly football betting occupies a large portion of individual daily activities which is booming in the and it is reported in 2018 according to statistics by the Tanzania Gaming Board (TGB) show that there are 2,684 betting stations countrywide, with most of them, about 1,344, being in city of Dar es Salaam alone and betting is a major source of national revenue hitting Sh1.4 billion a month.

Although, what can be said is that the country is deeply rooted with sports as it is said in early years Yanga and Simba are the two oldest clubs in the country dating back to 1930s.

Pragmatic Play embarks on an ancient quest in SWORD OF ARES™

ESA Gaming debuts in Africa in landmark deal with 888AFRICA