Hollywoodbets is an online gaming company whose origin is in the African continent in South Africa. The company provides punters from around the world with gambling services on their website which is accessible via smart mobile phones.

Hollywoodbets was founded in 2002 and its headquarters are situated in Durban a city in South Africa. As of now, the privately-owned company has employed over 5000 people. The company began in 1986 as a publishing entity going by the name Winning Form which operated in the country, as a distributor and publisher of cards for horse racing. The sportsbook hit the online market in 2002 when it got launched. The company has since expanded to more branches to include the Hollywoodbets mobile phone betting website launched in 2009. The original publishing company is still operational and distributing horse racing cards in the country. Hollywoodbets has one of the greatest CEOs, Suren Rampersadh, recognized and awarded for having the best CEO of the year in 2018. 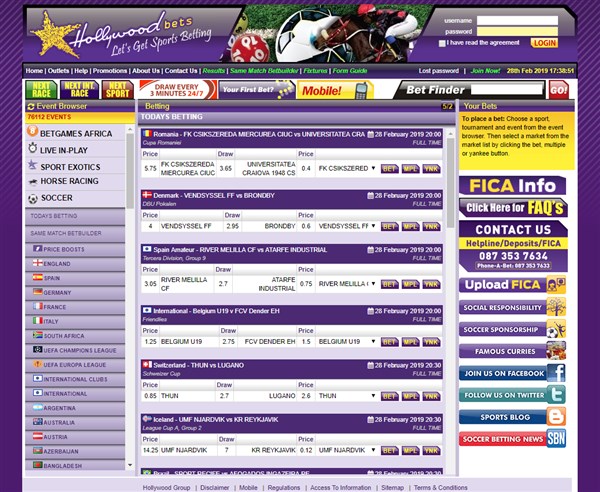 Hollywoodbets is available in several countries. These countries include South Africa, the founding state of the United Kingdom, Ireland, and Mozambique. South Africa alone hosts over 80 shops for gaming regulated and licensed by the local authorities in Limpopo, KwaZulu-Natal, Gauteng, Mpumalanga, Eastern, and Western Cape. The betting company runs two extra stores situated in Mozambique and Maputo and an online gambling platform that serves the global online gambling community.

In 2018 November, the Isle of Man licensed the company’s website to offer its gambling services in Ireland. Since then, the sports betting company has been offering its gambling products to the Irish punters. Hollywoodbets launched its website in the United Kingdom in 2019, and this was made possible by the country’s Commission of gambling.

Hollywoodbets provides gambling services for several activities such as sports, Casino, and Lotteries. Some of the sports available for betting on the Hollywoodbets include Football, Tennis, Horse racing, motorsport, rugby, cricket, and many more. There are also over 1500 draws for lucky number lotteries available on their website on weekly basis. Punters can place their wagers in-store or from the company’s online betting platforms. Sports betting involves in-play and live- betting options.

Hollywoodbets is one of the betting companies that believes in giving back to the community. The company gives out bursaries and scholarships to qualified candidates from the local football teams in Kwa-Zulu.

Hollywoodbets has sponsored numerous teams from various sports. Additionally, the company has been the sponsor for the famous Cricket team- Dolphins team- that has the name of the company preceding. Others include both the KwaZulu-Natal Inland and Coastal teams which participated in the T20 Cup of Africa in 2017. The company played the role of the official sponsor for the Murray Cup in 2018, a popular Knock-out competition amongst rugby clubs in the KwaZulu-Natal Rugby Union.

Hollywoodbets has caught the eyes of many and has been recognized and received an award as the Best Company in the Corporate Social Investment category in a Gambling Award event that took place in South Africa in 2018. Additionally, the sportsbook has pocketed awards for producing the Best CEO, Best Employer to over 5000 employees, and the Best Campaigner for Sport Betting in the same year. In March 2019, Hollywoodbets appeared in Magazine for iGaming as position 8 of the 50 gaming sites ranked as top sites in the World.

Hollywoodbets is a sports betting company that cuts across the board. The company has chosen its Brand Ambassadors from across the sports which it sponsors. Some of the BAs include Jerry Sikhosana and Brian Baloyi, from football teams. Anthony Delpech, a Jockey who formerly championed horse racing in South Africa, and Mark Procter, formerly playing cricket.

TVBET Strengthens Its Positions In Poland Through A Deal With Betclic