Kyle Akaloo took a deep breath and carefully plotted his next move with the South African National Blackball title on the line,The 29-year-old, who is nicknamed Viper, knew exactly when to strike sinking the black in the deciding game with the score tied at six-all at the sport’s premier tournament which was held in Bloemfontein.

Akaloo’s victory over defending champion Aden Joseph handed him the national crown and sees him become the top ranked player in the country.

“My name will forever be etched in history. It’s the greatest feeling ever,” said Akaloo, who hails from Malvern. This literally means that I am the best pool player in South Africa, and no one can ever take that away from me. I am filled with pride to bring the title back to Durban. When he arrived in the City of Roses earlier, Akaloo, who finished as runner-up last year, said he felt confident and excited, I knew from the day the tournament started that I would win it.

I was super determined to win, so I just wanted to play my game. I didn’t want to change anything in terms of tactics. Even when I was 6-5, I had cross double on the black, and I went for it, and it didn’t fall, that was to win 7-5. I was confident, however, that I would get another chance,” he added.” 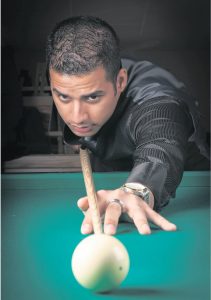 Akaloo’s dad, Mervin, introduced him to the sport at the age of eight. A decade on since he began competing on the national circuit, Akaloo said this victory ranks as his biggest achievement to date.

“It is the title that has eluded thousands of players, and to be one of the few that has won it, just makes it so special,” Akaloo said. Hours and hours at work at the Ricochet’s Sports Bar, a Chatsworth based business run by his family, has finally paid off. I’ve had huge support from everyone. My coach Cuban Moodley and I have been working quite a lot, leading up to the championship. But out of everyone, my very good friend, Sandeep Deoraj, had unshakable faith and belief in me to win.”

How Lottery Money Was Used To Fund Mansions For High Flyers

What is pulling the plug on digital arts in South Africa?

The Rise of Online Gambling in South Africa

Horseracing Should Be Listening!

Hollywoodbets Now Has an App!