A luxurious mountainside mansion with sweeping views of Simon’s Town and False Bay, owned by a trust controlled by dodgy Pretoria lawyer Lesley Ramulifho, was described as “five-star” when it was put up for auction a few years ago.

In rural Rustenburg, in North West, a magnificent boutique hotel on a property owned by a company belonging to former National Lotteries Commission (NLC) board member William Huma, lies in the picturesque foothills of the Kgaswane Nature Reserve Mountains.

And in Midrand, Gauteng, a luxury guest house with conference facilities set in a large garden with “a country feel” is owned by a company belonging to Kwaito star and music producer Arthur Mafokate.

The three properties, in different parts of South Africa, all have one thing in common: they were all bought using money from Lottery grants allocated to non-profit companies meant for good causes.

The properties were frozen after the National Prosecuting Authority’s Assets Forfeiture Unit (AFU) obtained a preservation order in terms of the Prevention of Organised Crime Act, based on evidence gathered by the Special Investigating Unit (SIU). The Act was promulgated in 1998 “to combat organised crime, money laundering and criminal gang activities.”

Also included in the preservation order are a luxury home in a gated estate in Pretoria owned by a trust controlled by former NLC legal manager Tsietsi Maselwa, and a nearly 14-hectare plot in Pretoria owned by former NLC board chairperson, businessman and pastor, Alfred Nevhutanda, and his pastor wife, Tshilidzi. Both of these properties were also paid for with misappropriated Lottery funds.

The SIU has been investigating corruption involving the NLC since President Cyril Ramaphosa signed a proclamation in October 2020.

In terms of the order, the owners are prohibited from “selling, disposing of, leasing, transferring, donating, or dealing in any manner whatsoever with respect to the immovable properties”.

Investigations revealed how money had been misappropriated from five non-profits that had received grant funding from the NLC of approximately R56.3-million meant for community development projects, the SIU said in a statement.

These are the South African Art and Development Association (SAADA), the Matieni Community Centre, Dinosys, Zibsicraft, and Taung Cultural Music and Arts Expo.

The AFU was granted the preservation order after an ex parte application to the Gauteng High Court on 21 December last year, which was only made public on 13 January. In such an application, notice is not given to the other party but there is usually a return date when the affected party can appear to argue against the order, and also present evidence

With the new year barely begun, the latest preservation order is a clear sign that the noose is continuing to tighten on people involved in the looting of the Lottery.

This is the latest application in a series of court-ordered preservation orders, like this one, that has seen the freezing of luxury homes, properties, a farm and vehicles bought with Lottery funds. 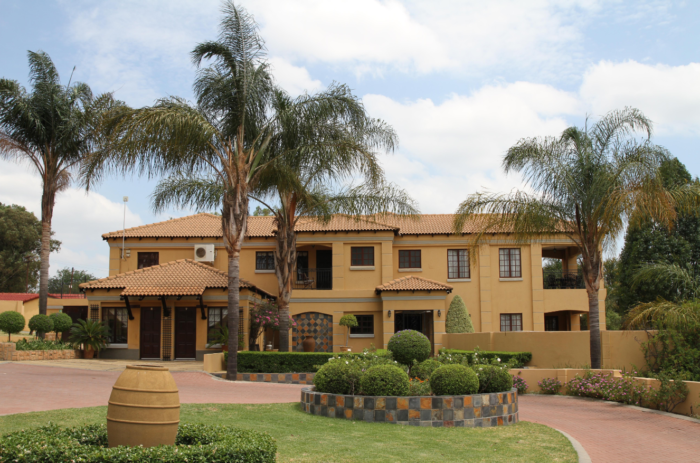 A farm owned by Ramulifho and a luxury estate owned by a company of which former NLC board chairperson Alfred Nevhutanda is the sole director was also frozen last year. And, the pension of former NLC chief operating officer Phillemon Letwaba has also been frozen.

Democratic Alliance member of parliament Mat Cuthbert, who has led the charge in Parliament in exposing Lottery corruption, congratulated the SIU but said that “there needs to be a greater urgency” from the National Prosecuting Authority (NPA) in charging and prosecuting members of the syndicate. “It is not enough for the funds to be recovered – these criminals must be placed behind bars,” – he said in a statement.

The money to pay for the latest properties to be frozen was diverted from non-profit organisations (NPOs) that had been funded for a variety of projects. This guest house in Midrand was partly paid for with Lotto grants given to kwaito star and music producer Arthur Mafokate.

SAADA, an NPO headed up by kwaito star and music producer Arthur Mafokate, was registered in 2011 but appears to have limped along financially until it received grants totalling R9.3-million from the NLC in 2014 and 2015.

The funding was for a countrywide talent search competition and “to host workshops for upcoming artists to improve and uplift the standard of musicians in the music industry”, according to a report at the time. The workshops covered topics ranging “from refining talent, securing and managing recording deals, contracts, media interviews and marketing their music”.

The SIU says that soon after the second Lottery payment was received, five payments totalling just over R4.5-million were transferred to Roadshow Marketing, owned by Mafokate, which in turn paid R4.4-million into “a home loan account” in November 2015.

On 20 January 2016, Mafokate then made an offer to purchase the Villa Rosa Guest House in Midrand via 999 Music, of which he is the sole director. The next day the SIU says that R4.3-million was then transferred from the home loan to 999 Music, which in turn transferred R675,000 and R361,000 to attorneys handling the purchase of the guest house by 999 Music.

The whistle was blown on the abuse of Lottery funding in 2015 by Brian Mokoena, the former secretary general of SAADA and chief operating officer of two of Mafokate’s companies – Roadshow Marketing and 999 music. Mokoena claimed that Lottery money was used to help buy the guest house, in an affidavit he deposed at the Midrand police station on 15 May 2015.

In his affidavit, Mokoena alleged that besides Lottery money being used for the guest house … vehicles paid for with the grant were used to ferry Mafokate’s artists, including his son, DJ AJ, and kwaito star Chomee, a fellow board member.

“Cameras, printers, laptops and furniture bought by SAADA ended up at his guesthouse. As the secretary-general, together with the board, we were sidelined from the activities of the NPO. The chairperson [Mafokate] operated and used the NPO at his own will. Thus the NPO ran as the personal fiefdom of Arthur Mafokate,” – Mokoena said in his affidavit.

“I am about to travel the whole country in discovering 1000 potential young people (100 per province and 100 that will be randomly picked) and workshop them about how to survive the music industry,”

Mokoena told GroundUp that he had confronted Mafokate about the use of Lottery funds for his personal use. “He was very arrogant and told me not to tell him what to do.” After the two fell out, Mokoena says he resigned and left “without a cent”.

Mokoena said he met several times with former NLC Commissioner Thabang Mampane, Letwaba, Nevhutanda, and Maselwa, and informed them that Lottery funds were being abused by Mafokate. “But nothing came of it. Mampane was very patronising to me. She told me to calm down and offered me a can of Sprite because she said that I needed to chill and bring up my sugar levels.”

Mokoena says he also met with former NLC board chairperson Nevhutanda and Mafokate about the matter.

“Nevhutanda said he wanted to ‘sort it out’ but I was not interested. I did not want to be part of any deals,” – he said.

Mafokate’s company, Roadshow Marketing, has also been the beneficiary of multiple contracts worth more than R3.6-million between 2019 and 2021 to supply goods and services to the NLC. This included media buying, marketing and marketing materials, and video production. The company was also paid R84,599 for “branded unisex rubber bracelets” and R204,096 to supply diaries for 2020/21. (…)