The town of Verviers, Belgium is in the flat basin formed by the valley of the Vesdre River. The water there was of such high quality, thanks to its low lime content, that it was particularly suitable for washing wool.

It was in this valley that the Simonis factory was set up in 1680 by Guillaume Henri Simon Simonis, a middle-class Verviers merchant born in the town in 1640 and known as “le Mercier” (“the haberdasher”).

The company itself was established on a more permanent footing by Jacques Joseph Simonis and was named after his son Iwan, who was born in Verviers in 1769. Today the name Iwan Simonis is now synonymous with the highest quality billiard cloth. 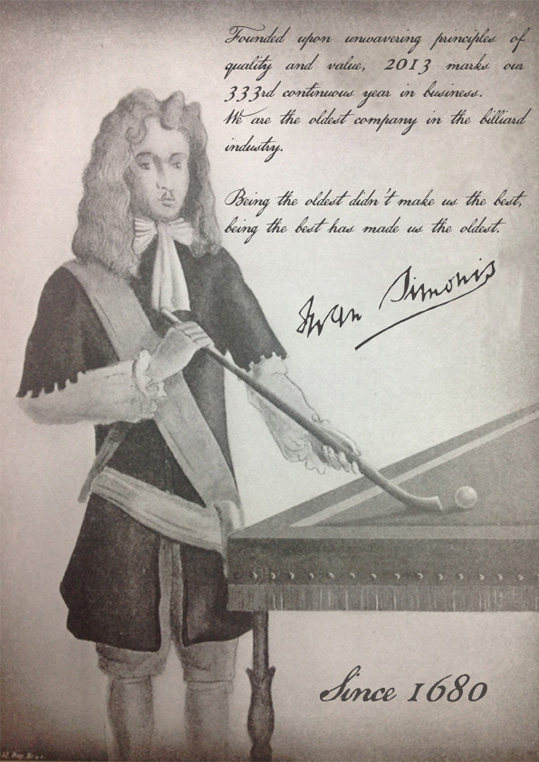 At the end of the eighteenth century, a spinner in Verviers would work with a single spindle, whereas in England, the Industrial Revolution had already resulted in machines being used for spinning wool. The British government threatened anyone who exported this technique with permanent exile, in order to protect the country’s monopoly.

Nevertheless, William Cockerill, a young British engineer, departed for Sweden in 1797 with the blueprints for his famous wool-spinning mill. However, no one seemed to be interested in his ideas, and he eventually ended up in Hamburg. There, he met a wool buyer from Simonis who realized the value of this technique, which had until then been unknown in continental Europe.

This pioneer in the field then came to Verviers with his family and signed a contract in which he agreed to produce spinning machines exclusively for his new employer. The first machine was constructed in 1797 in the building known as “Au Chat”.
Success was not long in coming to Simonis, which, in addition to being able to compete with the English on level terms, had gained a major technological advantage over its continental competitors.

This spinning machine was only the first of many technological innovations that were to see the light of day in Verviers at the beginning of the nineteenth century. These inventions included machines for carding and spinning wool, longitudinal shearing machines and the Leviathan, which was used to clean the wool.

More generally, electricity, the steam engine and the coming of the railways increased capacity in terms of both production and transport to levels never seen before. In this same period, the bill of exchange became widespread in commercial exchanges, seeing as it had the advantage of eliminating the risks associated with transporting and using cash, in the form of gold or silver coins, for business transactions.

In 1857, demand from the wool industry in Verviers led to a plan to build a dam in the area, in order to supply all the local textile companies with pure water of equal quality. This dam, at La Gileppe, with a capacity of 12 million cubic metres, was inaugurated in 1878.
All these innovations, plus an abundant supply of skilled labour, made Verviers a prosperous town and a center of the wool industry, like its competitors Bradford (England), Mönchengladbach (Germany), and Roubaix (France).

During the First World War, there was a sharp reduction in the trade in woolen cloth because of the shortage of raw materials. Then came the economic crisis between 1929 and 1935, which caused a further decline in industrial activity, especially in the Verviers area. Production was cut and workers were laid off.

The Second World War followed and, like the first, led to a shortage of wool. However, there was worse to come. At the end of the War, the Allies mistakenly bombed Simonis’s spinning mill, and this prevented the company from playing a full part in the recovery in business life that followed.

Peltzer & Fils, a celebrated company in its own right, was established in 1785 by Jean Henri Peltzer, from Stolberg, in Germany. The company was set up at Hodimont, which is now part of the district of Verviers, but which at the time was part of the Duchy of Limburg, a Dutch territory belonging to the Hapsburgs.

The company continued to expand, and a subsidiary was established in Buenos Aires in 1849 and another in Poland in 1885. In 1961, the activities of S.A. Simonis and Peltzer were combined and the Société Anonyme des Draps et Filés Iwan Simonis (or the Belgian public limited company Iwan Simonis Cloth) was created, with an emphasis on commercial continuity. The capital of this company was fully subscribed by the PELTZER group.

The growth in demand for Iwan Simonis cloth in North America led to the creation in 2000 of the subsidiary Iwan Simonis Inc., at Gurnee, near Chicago, Illinois (USA). Iwan Simonis, Inc. subsequently moved to a larger facility in Libertyville, Illinois (USA) in January of 2010. Iwan Simonis billiard cloth is now exported from the production site in Belgium to more than 90 countries, on every continent.

The best products come together !

In 2012, IWAN SIMONIS, world leader in the manufacture of billiard cloth, and ARAMITH, world leader in the manufacture of ARAMITH billiard balls merged. The union of these two complementary Belgian products – loved by amateur and professional billiards players the world over and sanctioned by the majority of the championships and tournament organizers worldwide – will help to reinforce the promotion on the international level of these two globally reputed and high-quality billiard products: IWAN SIMONIS cloth and ARAMITH balls.

In January 2016 Iwan Simonis S.A. and Saluc S.A. were delighted to announce that WSP Textiles Limited, England and its STRACHAN™ and PLAYNE™ brands has joined the Group. Iwan Simonis is the leading manufacturer of the SIMONIS™ premium quality worsted billiard cloth and Saluc S.A., home of the famous ARAMITH™ balls, is the global leader in the production of true phenolic billiard balls.

WSP Textiles is the leading manufacturer of premium quality billiard and tennis ball cloth. Based at Stroud, Gloucestershire, England, WSP has been making billiard and tennis ball cloth for over a hundred years. Its STRACHAN™ range of traditional snooker and English pool cloth is used at various high profile tournaments including the recent Dafabet Masters 2016 (World Snooker) and its PLAYNE™ tennis ball cloth range is the choice of the majority of leading manufacturers and brands in the tennis industry including the current Australian Open. 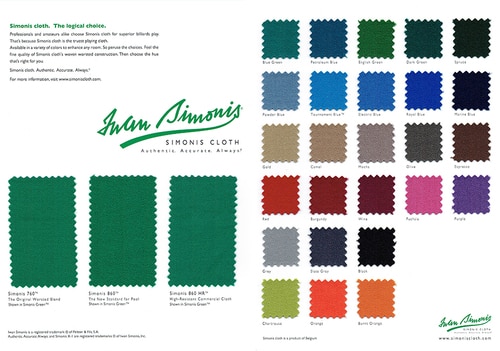 This new partnership with WSP enables a diversification of the Group activities by taking a leading position in the tennis ball cloth market. In billiard this combination of high quality iconic brands and products SIMONIS™, ARAMITH™ and STRACHAN™ makes our Group to be the partner of choice for cue sport federations, distributors, retailers and players and will create new opportunities to further develop the business.

For over three centuries, generations of technicians and skilled workers have been producing our world-famous, high-quality billiard cloth, which others have tried to imitate, but always in vain.

Our large factories contain the very latest specialist equipment, and our technicians are constantly monitoring and improving the quality of Iwan Simonis cloth. This is why, throughout the world, the Simonis Brand means the very best in billiard cloth.

To the owners of billiard tables or billiard clubs, and to players, Iwan Simonis cloth means the highest efficiency, a perfect roll and absolute precision.

Today group manufactures a complete range of pool, snooker, carom and pyramid cloths and balls, to suit the characteristics of every type of game played on a billiards table throughout the world.