A security operation targeting criminal gangs, illicit brew dealers and gambling shop operators in Kericho County will start today. Both senior and junior security officers who have overstayed in the county will be transferred as they had allegedly been an impediment in implementation of various operations in the region.

Interior Cabinet Secretary Fred Matiangi expressed regret that criminal activities were rife in the region, with security officers condoning the vice to the detriment of the people they should be protecting.

“By the time the clergy have held a meeting as a region and come to me to plead the case on insecurity and illicit brew consumption and gambling, that is when you know it has become a real menace to the people,”

Dr Matiang’i said the same issues had repeatedly come up during a meeting with administrators, security officers and Governor Paul Chepkwony, prompting the action to be taken. 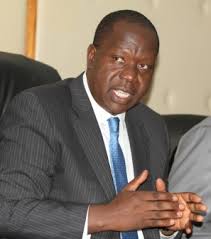 Foreigners are said to have sneaked in lotto machines despite a government ban with the most affected zones being Kericho town and Kapkatet trading centres. Youths are known to patronise the lottery shops, with some having been forced to engage in criminal activities to raise money to gamble.

Police officers and some administrators have been accused of collecting protection money from the dealers in what has enabled the vice to thrive. Illicit brew and consumption of spirits have been blamed for high cases of murder, rape, incest and defilements in the region. Chang’aa sneaked through from the neighbouring counties of Nyamira and Kisii is being sold in Bomet and Kericho counties in what has caused uproar among leaders and the clergy.

“We will deal decisively with those involved in criminal activities and other vice in the society as we have mapped out the areas that are most affected. You will start seeing action immediately in that direction,” – said Dr Matiang’i.

In the last two years, there have been baffling murder cases in the county, prompting the Directorate of Criminal Investigation (DCI) to send a team of sleuths to the region. One of the high-profile murders in the region was that of former Rai Cement general manager Chetan.

Does a gaming company finance a negative media campaign against foreign investors?