King of Africa is an African jungle themed video slot from Williams Interactive Software that is available both in brick and mortar casinos as well as online. There have been many African themed slot games brought on to the market, so the concept is not new, although King of Africa does strive to stand out from the African crowd.

This slot is part of WMS’ G+ slot series, and features five reels and twenty paylines. The game has a few interesting features including a wild symbol, a free spins round and the Hot Hot Penny respins feature. King of Africa is a low variance slot, meaning that big wins are rare but small wins and lower amounts of free spins are consistent. The game is also playable for a maximum of 30 coins, which makes it great for all budgets. This is an affordable pokie, which is also great for casual players who are looking for a bit of fun.
African Jungle Theme

Although the slot supposedly has an Africa Jungle theme, the backgrounds to the reels are more the open African Planes. Rolling grassland plays host to reels bordered in hot orange with a white background. The graphics are not bad, but a bit cartoony. The lion is very reminiscent of a particular animated movie featuring the royal feline. The buttons and information at the bottom of the screen are not WMS’s usual gold and blue, but are instead an earthy brown with gold highlights. All the symbols are African animals or artefacts, brightly coloured and nicely animated when they form part of a winning combination. The soundtrack to the slot is a kind of tribal vibe with lots of drumming.

The symbols in King of Africa are mostly a variety of African animals, with a few artefacts thrown in for good measure. Some of the animals populating the reels are Impalas, Zebras, Elephants and Leopards. Interspersed amongst these are warrior’s shields, spears and necklaces. This online slots machine Singapore has two special symbols, a wild and a scatter. The King of Africa logo serves as the wild symbol, replacing every other symbol on the reels except for the scatter. The scatter is represented by the iconic Umbrella Acacia, which for those who don’t know is a large African tree. 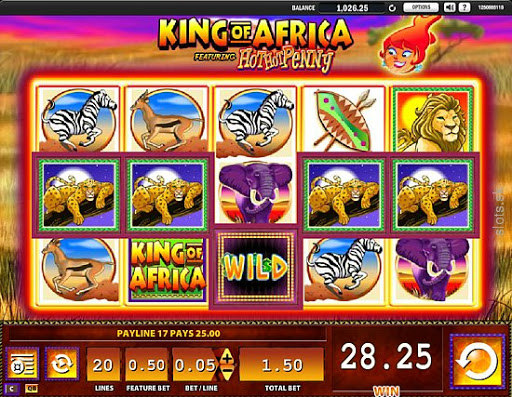 King of Africa has only really two exciting features. The first is the free spins feature that is launched when a player finds three or more tree scatter symbols anywhere on the reels. You will be awarded with eight free spins initially, but can win even more with the Pick a Box feature. In this bonus round, you will have the option of selecting three to five tiles, depending on the number of scatters that triggered the feature. Each tile hides a different prize, and you can be awarded with up to thirty additional free spins if the tile reveals gold coins. There is also an additional expanding wild in the fee spins round, which comes in the shape of a giraffe that randomly appears on your reels with every spin.

The final feature of King of Africa is the Hot Hot Penny Respins feature. This ensures that even if you miss out on the free spins round by getting only two scatters instead of the required three, the reels with the scatters will remain locked in place as the other reels respin twice just as with Canadian mobile casino sites have to offer. This feature is also active for all other regular symbols, and with it you can activate the free spins or even unlock the standard jackpot.

A Brief History of Gambling in Rwanda