The capital city Bangui, the official language is French. Autocratic leaders have ruled the country until 1993, and though it is now a democratic republic and as been plaque by civil unrest that started in 2012 which ended after a peace agreement was signed in February 2019.

All forms of gambling game are legal and regulated includes casino, lottery and sports betting in the Central African Republic. Although as at the time of writing the country has no well-known casino or gaming house, neither is it on record that any gambling is in operating in the country.

Though acquiring a gambling license in the Central African Republic the interested individual or company will have to pay a license fee of $30,000, 5% of the grant will have to be owned by an indigene. While the tax system, the company will have to pay 2-4% of Game Generated Revenue (GGR) to the government. At the same time, illegal gambling Penal code of CAR states that operating unauthorized gambling establishment or lotteries is punishable by imprisonment for five years and a fine of up to 5, 000, 000 Central African Francs (about $8500).

Online gambling not mentioned in the regulation, likely because it is not prevalent enough to warrant law. However, relatively the internet user is a little bit low, compared to other African countries in which 5.3 per cent of the population uses the internet, the penetration rate at 2.0% according to Internet World Stats. The penal code makes no mention of punishment for individuals players, and it could also be argued that online gambling sites do not need to constitute a gaming house. Those who participate in online gambling in the Central African Republic can do so without any repercussion, while the country economic situation is relatively improving. 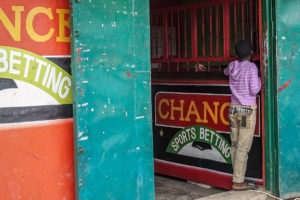 The Central African Republic’s economy is improving, despite difficult security and humanitarian environment. The Real GDP growth increased from 3.8% in 2018 to 4.5% in 2019, spurred by the steady recovery of agriculture and mining activities according to Africa Development Bank (AFDB). Although inflation rose to 3.5% in 2019 up from 1.6% in 2018 due to poor power supply problems and the security situation in some farming areas of the country, The economic prospect is promising. Real GDP predicted to reach 4.8% by the end of 2020 according to IMF due to an improved security situation that comes in the wake of peace and reconciliation agreement signed by the government and the rebel groups on 06 February 2019 in the capital city Bangui.

The increase in capacity of the country power generation in Boali’s hydroelectric production and the plans to build the Boali 2 hydroelectric plant should increase the country electric capacity to 10MW and the improved water supply and the country telecom sector. The Central African Republic, a transition country with a very long period of political instability the fact is that the country is moving towards digital transformation. Well, time will tell if sooner or later, more gambling operators will consider investing in the sector.

Article by Adeleye Awakan to know more about the African gambling industry, Consultant, please feel free to contact me on any of this channels: Email: [email protected] Linkedin: AdeleyeAwakan, Twitter: @AdeleyeAwakan, Instagram: adeleyeawakan