This past week, the Kenya Amputee Football Federation (KAFF) received a Sh1.5 million boost from Odibets ahead of its inter-counties championship in Nairobi. The event is set for the City Stadium in Nairobi this weekend and will be used by the organizers to select a team that will compete at the 2022 Amputee Football World Cup qualifiers in Der es Salam.

The tournament will consist of a 7-a-side game featuring a goalkeeper with an upper limb amputation and six other lower-limb amputations who will play on two crutches without prosthetics.

“We welcome this one-of-a-kind partnership and are delighted with the support from Odibets. This will ensure our talents are exposed as we will have a group of motivated players this weekend,”

“We strongly believe that our partnership with the Kenya Amputee Federation will further strnghten amputee football in the country. And offer thousand of amputees an opportunity to showcase their talent and create a career out of playing football.” 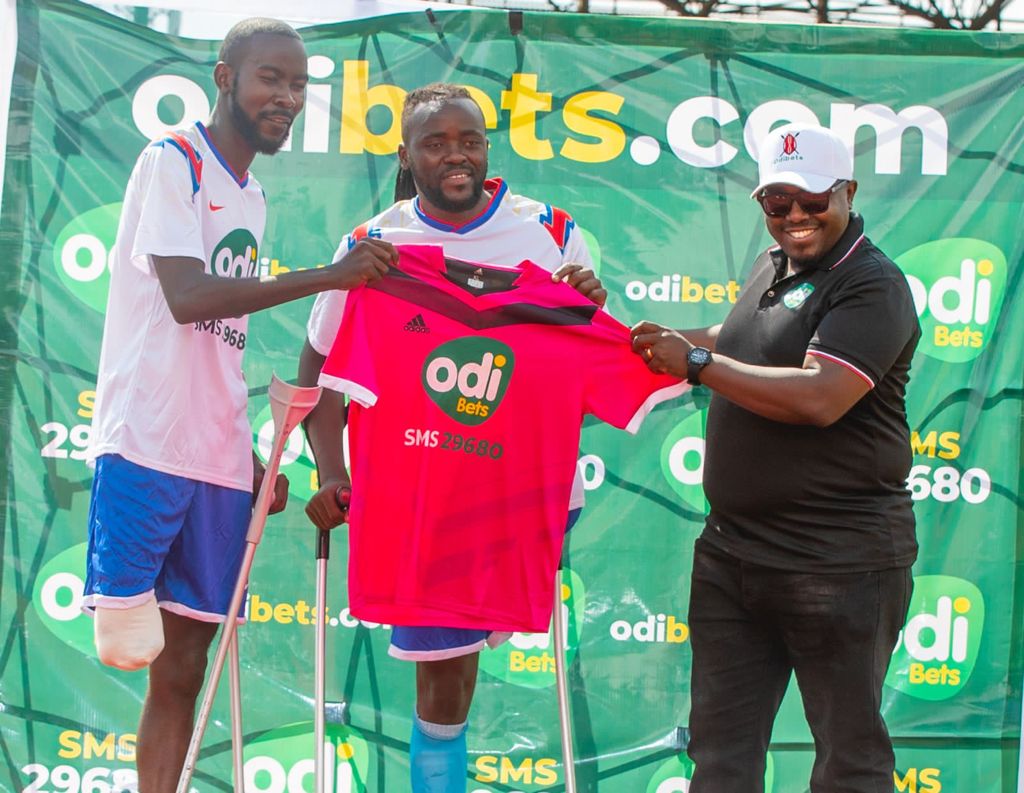 This partnership marks Odibets latest move to support sports coming a week after the leading gaming firm bought Ferdinand Omanyala, Africa’s fastest man, a brand new car as a gift for breaking the continental record at the Kip Keino Classic in Nairobi. President Uhuru Kenyatta, former Prime Minister Raila Odinga, and Sports cabinet Secretary Amina Mohamed were among the dignitaries alongside other Kenyans who cheered record-breaking Omanyala during last weekend tour. During the appreciating ceremony held at the New Stanley Hotel, Odibets General Manager Dedan Mungai said that the company was proud to associate itself with Omanyala and walk with him in his journey.

“We as a company are proud to associate ourselves with Omanyala who has proved beyond all means that Kenya can conquer the world in the field of athletics, his character, resilience, endurance and performance are aligned with our core values as a company,”

– said Mungai as he presents over the car keys to Omanyala.

Speaking during the event, Omanayala noted that he always knew he was destined for greatness and was very grateful to Odibets as they walked the journey with him, supporting him in all that he did.

“Odibets came at the right time when I needed them and it is through them, I was able to focus on my training enabling me to break the African record,”

– said an elated Omanyala who his family had accompanied for the appreciation ceremony.

In his speech, Omanayala advised his fellow athletes to embrace hard work and never give up on their dreams.

“Hard work, discipline and perseverance are the three main components of success. As I ran the race on that faitful day at the Kasarani Sports stadium I didn’t know right now I would be the proud owner of a car,” – said Omanyala.

The car’s number plate will bear the number 977 to celebrate his substantial record-breaking achievement. Meanwhile, this is Omanyala’s second reward from Odibets after an earlier gift from the sports betting brand worth Sh 1.5 million as a financial boost for qualifying for the just concluded Tokyo Olympics. The brand has recently supported Harambee Stars goalkeeper Patrick Matasi and his family in paying medical bills after a tragic road accident. It also helped former Ulinzi Stars and Muhoroni Youth forward Ezekiel Otuoma pay for his treatment abroad.