One of the fastest ways to disintegrate a society is giving free rein to gambling and its related menaces, as it is against both Islam and Christian teachings and doctrines and as well as its norms and values. When a person spends his whole earnings and time in casinos and football betting centres, then it won’t be long before his family and societal life begins to suffer considerably.

The sad part is, with the rise of football betting centers, young people especially students spend their lunch break money on gambling. Eventually this will begin affecting their performance and attendance in school and also lead to drop out cases and mass illiteracy, ultimately leading to the birth of a whole lot of vices and menaces in society. 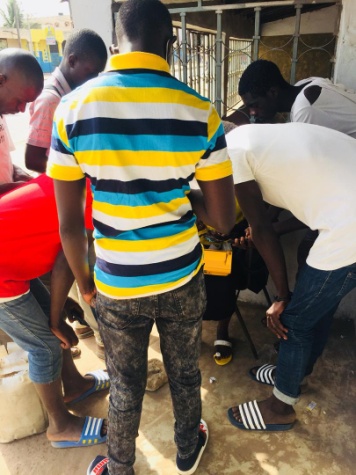 Since its resumption after it was banned in 2015 by Ex-President Yahya Jammeh, the betting business has now regained momentum and is attracting many people.

A source disclosed to this reporter that at the time before the betting gambling was banned in the country, students used their fares or even school fees on games especially soccer betting. He said students would leave their houses, put their uniforms in their bags and come to betting houses where they would spend the whole day.

“The time I won, I just bought a ticket for D25 and won D3,700,” another betting addicted young man said, adding that he used that money to buy a bag of rice for his family and the rest was given to his mother for fish money.

“You will see pupils as young as 13 years of age lining at kiosks during school hours and spending their ‘lunch money’ on purchasing sports betting tickets.”

For his part, Sheikh Jallow, marketing manager of GambiBet Company, said betting is an easy way to earn money, noting that many people have positively made it through betting. He added that betting is international and any player who wins; no matter how much money, they would be paid cash without delay.

“We have over 150 sub agents and 25 staff who are receiving nothing less than fifteen thousand dalasis (15,000) per month,” Sheikh Jallow said. “We have two types of games: that is Football and PMU.”

Sheikh Jallow added many people are winning from the betting. This year some people have won up to D150,000 in our bet. The money will help the players to solve some of their problems.

A 27-year-old Musa Jallow revealed that there are huge benefits in betting as “you can invest D25 for a ticket and win up to D500,000. “I have won up to D60,000 not at once but in different games,” he said, adding some games pay 9000 or even more. He said the challenges associated with being addicted to betting is, it can lead one to engage in illegality activities such as stealing which is unlawful and also forbidden.

According to Jallow, sometimes he would invest people’s money with the hope of winning and in the end, the result won’t yield. “Betting can make people lose trust and confidence in you.” Jallow said he once invested his brother’s money that he was assigned to deposit at the bank which caused problems in his life after he was chased out of his brother’s house because of the D7000 he used from his brothers money to bet.

However, Buba Manneh, 54, a native of Bundung Borehole described betting as income earning. Buba said he plays it because getting a job that pays well in the country is not easy. Mr. Manneh highlighted the important role betting companies are playing in the country. “Many people today bought their houses through betting and from it they also feed their families,” Buba said.

The 54-year-old added that betting is very simple, as one can invest as small as D20 and stand a chance of winning up to D500,000.

“I have never won huge amount at once, but ranging from D10,000 to D5000, I have been winning it always,” Buba said. “Betting has helped me and my family a lot in different occasions.”

He said that thanks to betting that his family is not begging today, adding he has also paid his house rent for the past 9 months through betting. “I do not have any other job apart from betting,” Buba said.