Rwanda is looking for ways to fill its entertainment space. The hospitality ecosystem has begun to take shape, especially in the past two years with the signing of a sponsorship deal with Arsenal football club, a top side in the English Premier league.

A second shirt deal was recently signed with a French league club side Paris Saint Germain. With the momentum built around tourism, and football, some of the business that has sprouted is the casino gambling and the sports betting industry.

Therefore, the English football club has been advertising “Visit Rwanda” on players sleeves for the past one year and half. Indeed, the campaign which was controversial at its lunch has lifted overall tourist’s numbers by 8 percent, according to Rwanda officials, a 3 year deal worth 30 million pounds in May 2018. Another, report from the Rwanda Development Board (RDB) the numbers of tourists from England alone has climbed by 5 percent compare to the previous years. Thus the deal with Arsenal football Club, in return generate $88.3 million from tourism directly in 2018.

The casino and sport betting industry is also benefiting from this initiative as the overall gaming landscape of the country is experience unprecedented growth rate in they business. According to the country local news agency report that the numbers of tourists customers coming to play casino games in recent years as skyrocketed, compare to previous years, though, they are only 3 legalize casino in the country and the biggest is Casino Kigali which offers range of casino games reported that the increase in sales can be trace to the numbers of tourist which visit the country in recent time. Furthermore, the sports enthusiasts particularly, football has quickly gain huge attention especially from the youths in the country. 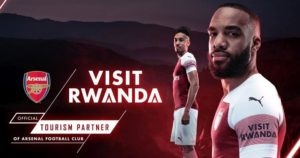 For example, in the street of Kigali where you’ll find a lot of billboards displaying Arsenal football stars players like Emerick Aubameyang and Nicolas Pepe as well as other major outlets within the country and this has also made the English league more popular in the country and has increased the interest of locals to watch English premier League matches, though this as create an atmosphere were people turn in to sports centers to watch a weekend televised football match which as also stimulate the youths to gamble on football betting as this gives them another opportunity of making money and entertainment.