Director General of the Ministry of the Presidency, Joseph Harmon, yesterday urged the Gaming Authority to put measures in place to encourage “responsible gambling” pointing out its impact on “challenged” communities.

According to a Ministry of the Presidency press release, Joseph Harmon made the statements at the opening of the Gaming Authority’s second stakeholder forum for 2019, which was held at the Herdmanston Lodge, Georgetown.

“It cannot escape notice that some of these operations are in some of the specially challenged communities of our country and therefore, the urge to place monies on betting other than the other issues which will affect us as citizens and as families… will have some negative impacts… so I trust that the Gaming Authority pays very careful attention to this development that is taking place,”

– he said, according to the release.

He added that given the fast-paced movement of Guyana’s economy, the Government anticipates that there is going to be pressure on the Gaming Authority for licences to open up more gaming establishments. 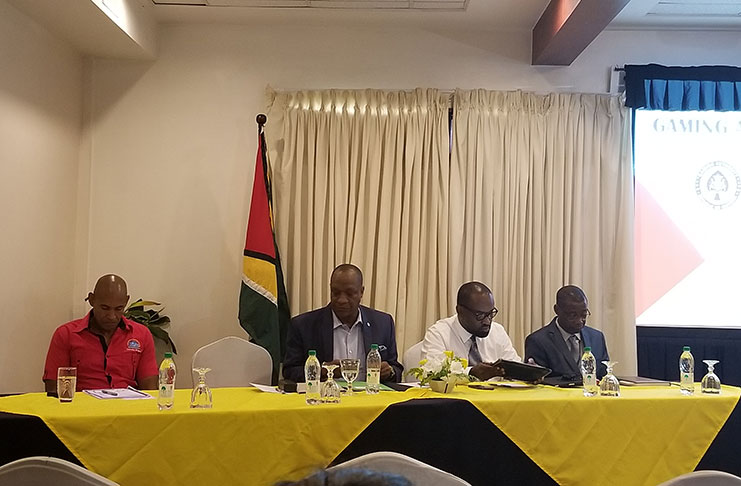 The event was held under the theme “responsible gaming in Guyana” and was expected to raise awareness on some of the negative impacts of gaming on mental health.

Harmon, whose government has been described as a caretaker one by the Caribbean Court of Justice, pledged Government’s commitment to work with the Gaming Authority to create positive impacts.

“The Government through all relevant Ministries and agencies will support the efforts of the Gaming Authority to ensure that through the establishment of responsible policies, the gaming industry will have more positive than negative impacts on our citizenry and contribute to the overall wellbeing of our society,”

Chairman of the Gaming Authority Board, Roysdale Forde, said the concept of “responsible gaming” will have to eventually become entrenched in the Guyanese society and subsequently called on all stakeholders to work together to achieve this objective.

“It is our obligation to work together to ensure that the principles and standards that we would have established, minimise the possible harms and prevent irresponsible gaming, responsible gaming is the only way forward for our industry and we have no choice but to embrace this concept,”

– Forde said, according to the release.