It’s hard to miss the SportPesa logo at an Everton FC home soccer match in the English Premier League.

The Kenyan sport betting firm’s logo is slapped on the team’s shirts and across the stadium as part of a five-year £48 million ($62 million) deal as Everton’s main sponsor. It’s also one of many such deals which see African brands partner with clubs in the English Premier League as a marketing tactic.

Over the past two decades, the Premier League has grown to enjoy unrivaled popularity across the continent among hundreds of millions of fans who support English clubs. With soccer being the national sport in many African countries, the Premier League (which was founded in 1992) and its clubs soon became institutions of sorts among fans by virtue of being readily available on terrestrial television in the 1990s. Clubs like Manchester United, Arsenal, Liverpool and Chelsea have become household names everywhere on the continent.

The league’s popularity has held firm even though the cost of broadcasting league games has rapidly spiked. SuperSport, the main broadcasters of the Premier League in most sub-Saharan African countries is estimated to have paid £296 million ($381.3 million) to air games for the 2016-2019 broadcast cycle—44% more than it did for the 2013-2016 cycle. In fact, airing Premier League games alone has become a cornerstone marketing asset in the pay TV business across Africa 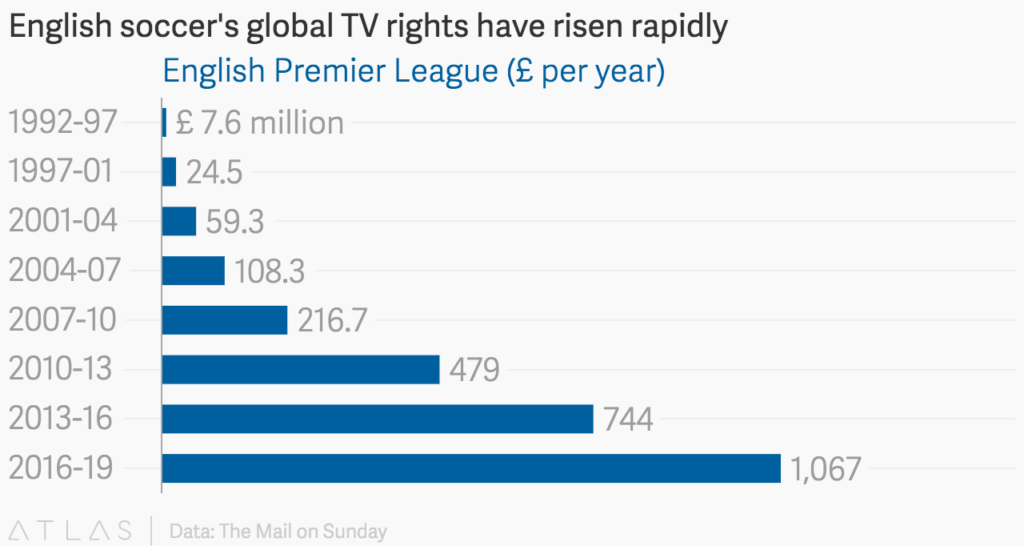 For several African brands, the feverish interest in the league even across several social classes is a major marketing opportunity to reach local consumers. Quartz Africa estimates brands targeting customers in African countries and African-owned brands spend over $40 million each year on some of the world’s richest clubs that already generate well over $1 billion a year in commercial partnership revenues alone.

Kenya’s SportPesa is looking beyond its home base with regards its sponsorship. Its foray into England was fueled by ambitious expansion of its gambling brand into the United Kingdom. After emerging as a dominant sports betting player across East Africa, SportPesa struck sponsorship deals with Hull City (before it was relegated from the league) and then Everton, to raise its profile in the UK in a bid to compete with well-established betting institutions including Ladbrokes and William Hill.

Leveraging the Premier League’s popularity also provided SportPesa with a marketing outlet amid a clampdown on outdoor and social media advertising in Kenya as part of measures to control the rise of betting addiction locally.

In most cases however, regional partnership deals with Premier League clubs are aimed at reaching audiences in markets at home on the continent. Clubs that have African stars on their roster are a particular attraction, says Kelvin Watt, managing director for Africa and Asia at Nielsen Sports, a global marketing intelligence firm. Wise to the local connection, Premier League clubs are also increasingly leaning on their raft of retired African stars as marketing tools on the continent, Watt adds (…)