The biggest so far rivalry money match in the pool history of Uganda happened on 11/08/2021 when SEED number one Ibrahim Ssejjemba locked horns with Bwanika Mansoor who is the reigning national pool champion of Uganda in a race to 21flames battling for 2million Uganda shillings where Ibrahim out classed Muto in a decisive flame with a come back from 17 games to 21 which was the finishing point.

Both players seemed to be well prepared for the event to show their best on the table where Bwanika seemed to be so hot more so in the first 5flames that he lead when Ibrah was still on a struggle to win atleast a game for his side, most of these games Muto was finishing the game with just one visit which really had to put Ibrah fans on tension whether the day would be theirs well as the Bwanika side was having great hopes of winning this match.

However, like any other sport pool needs more consistency and calmness which Ibrah has shown in all his recent money matches, he managed to come back and lead with a 7 straight games from 0 and from their he managed to lead the game up to 17 – 14 in favour of Ibrah well as Muto came back win a stunning performance of leading for the second time again in the race left with only 1flame to seal the challenge as the WINNER which never happened to his side and the fans. 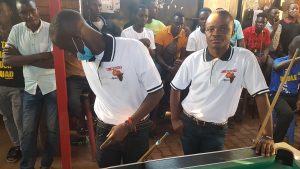 After a 10minutes timeout that Ssejjemba Ibrahim had asked for, He came back as hot as a chili spiced sauce with a break and finish ( APPLE ) to climb up his scores to 18games won and only left with 3games also to seal off the challenge as a the victorious one however after his nice Apple all the hopes were extremely low to the fan side of Ibrah because it was a break from Mansoor were most of the supporters thought it was going to be Mansoor’s chance to win the battle with a break and finish which of course ended in tears when he ( Muto ) made a dry break and Ibrah couldn’t grant him a second chance.

With the scores 19 – 20 in favor of Mansoor, Ibrah came with a very nice cue ball controlling and hence winning the flame hence tallying the scores of 20 – 20 forcing the match into the decisive flame which Mansoor still had the chance to win the challenge yet again if he had not made a dry break. Ibrah won the decider flame with a very nice game reading and good cue ball controlling for the black hence ending it in tears on the opponent side.

E-PLAY AFRICA has managed to speak to some of the people dominant in the pool fraternity in Uganda to give some review about the challenge and other pool related Issues.

” I first of all would like to thank both the players for the good performance they showed us yesterday and honestly it makes me happy to see nice games from my boys because they are all on the national team, however my concern is about the fans who only come to the Arena with aim of destructing our well concentrated players with funny mocking words. I want to emphasize this matter to my fellow pool player to always control our fans more in such occasions. Pool is more interesting if players are left to do their work other than mocking them and destructing their minds. Otherwise thanks to all the managers and players Congratulations Ibrah and Hard luck Muto next time better.”

KATEREGGA BOB ( The manager of Ibrahim ):

“Honestly Bwanika Mansoor has shown as a very good performance and indeed its with no doubt he is one of the best pool players Uganda has so far and I would really like to thank team Mansoor for having played with my player this challenge has been waited for by fans from our side and theirs. I want to thank all Ibrah fans who exhibited discipline in the Arena even when we were lead with a difference of 4games and lastly I congratulate my player indeed he convincingly showed to the country that he deserves the position of being SEED 1 and also would like to notice the Manager of Muto that we are ready for a rematch if they feel not contented with the defeat our gates are open widely for all the players.”

Special thanks to SIMON PETER KYOBE AND JONDU EMMY , who feed  us with all the pool related issues and also feeding people with the live games on facebook.