Africa has shocked many by embracing golf despite being viewed as an impoverished continent. A total of 828 courses have since been established and the numbers are gradually rising. Half of the courses are located in South Africa.

Ever fancied a game of golf in a serene relaxing environment? Here’s a look at the top 10 golf courses in Africa in no particular order.

1. The Cascades, Soma Bay – Egypt
The course boasts of an extensive 6991 yard uniquely designed course. It features expansive water hazards and serene green fairways. Palm trees dot the fairways and should you venture offline, you will experience desert sand on every hole. Also present at the Cascades is a Golf Academy boasting of a 60 bay driving range.
Charges: Green fee is $96 a round.

2. Mazagan Golf Club- Morocco
This was designed by Gary Player a South African icon. It opened its doors in 2009 and is ranked 1st position in Morocco. Its grounds stretch to the beach on the Atlantic Ocean shores. The 72 course sits on grounds estimated to be 7484 yards. Strong winds blowing in from the Atlantic remains the course’s greatest challenge as they can get quite strong at times.
Charges: $65 a round for walk-ins. 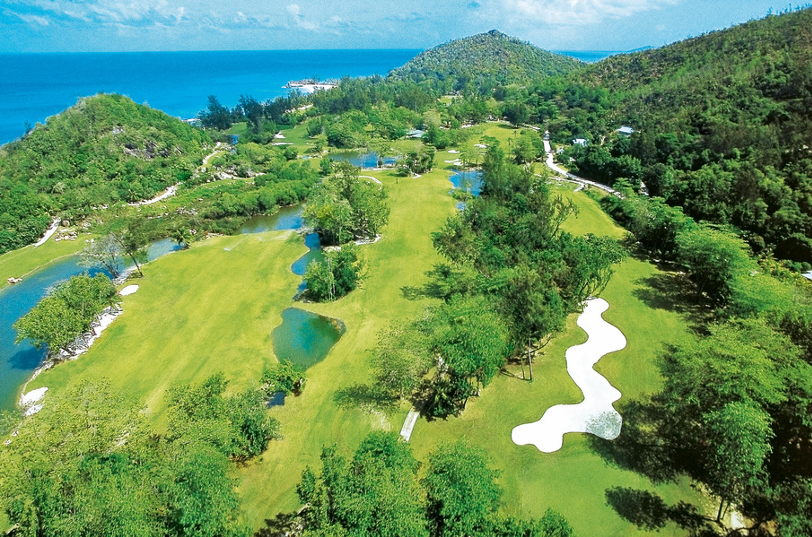 3. Lemuria Golf Course- Seychelles
Built on serene 5827 yards, the course boasts of being the only one with an 18-hole course on the Indian Ocean sand. It makes up for the lack in length with the beautiful landscape it bears. Rodney Wright and Marc Farry were the brainchildren of this gem. Narrow fairways characterized by sand and palm trees await wayward shots. It is not uncommon to lose at least 10 balls in a round, so stock up on your balls on the course.
Charges: Room rates are inclusive of green fee. $64 compulsory fee is required for carts.

4. Gary Player Golf Course- South Africa
The Gary Player Golf course has hosted the Ned bank Golf Challenge 32 years in a row since it was established. The tournament dubbed ‘Million Dollar Challenge’ is a 12 golfer is an invite-only affair. The prestigious tournament has been graced by Tiger Woods renowned golf player, Jack Nicklaus and Sergio Garcia just to name a few.
Charges: Green fees is $80 a round

5. Le Touessrok- Mauritius
Ever fancied a game of golf in a serene relaxing environment? To access the course, you would need a helicopter or a boat as it is only reachable by water. Found on its island in Ile Aux Cerf, it measures 7115 yards, par 72. It has several holes lined beside the beach and displays a range of exotic floras. The black volcanic rock on several holes is indeed a sight to behold.
Charges: Room rates are inclusive of Green fee for in-house guests. An optional $32 may be required for a cart

6. Heritage Golf Club- Mauritius
Heritage Golf Club designed by Peter Matkovich stands out from seven golf courses in Mauritius. It has an expansive 7000 yards golf ground, which allows one to catch a glimpse of the Indian Ocean. Strategic boulders and course signs on rocks enhance the ambiance.
Charges: If you are accommodated at Heritage, green fee is free. If staying elsewhere $205 per round.

7. Windhoek Golf & Country Club, Namibia
Windhoek Golf club is set on 6675 yards, par 71 comprising of wetlands. Golf Digest recently voted 18 holes here as some of the best. Deep bunkers surround the lush green grounds. A state of the art resort is quite close to the club.
Charges: Green fee is $33 for in-house guests 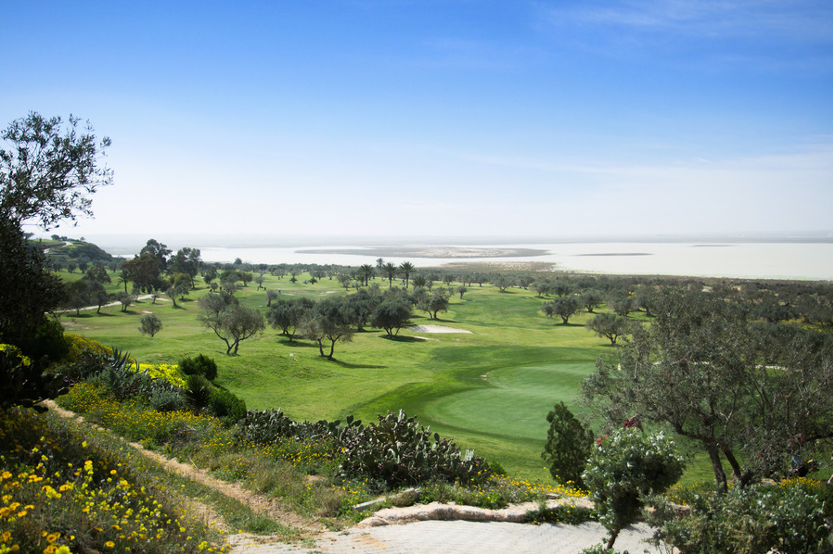 8. Flamingo Golf Course- Tunisia
This rare gem in Tunisia is situated on a plateau comprising of fairways running through olive trees. Located on the Mediterranean, the 6698 yards designed by Ronald Fream go over crests and small hills that give the make the course a spectacular one.
Charges: low season $56-230 a round, high season $70-290 a round

9. Leopard Rock Golf Resort- Zimbabwe
The resort also designed by Peter Matkovich has often been ranked position 1 in the nation. It rests pretty in Harare, the capital city of Zimbabwe, and is known for its USGA-quality greens. Its grounds extend to 6724 yards, par 72 Leopard Rock. Carved out of thick woodlands, it is home to a variety of birdlife and indigenous wild orchids.
Charges: $30 a round for in-house guests and $40 if staying elsewhere.

10. Fan court Links-South Africa
The course measures 6919 yards with the ability to be stretched to 7535 yards to accommodate experienced golfers. It has hosted the Presidents Cup in 2003, which resulted in a dramatic showdown between Tiger Woods and Ernie Els. In 2012 Volvo Golf Champions Tournament was held on this ground.
Charges: One can only play at Fan court if accommodated here.