Jewel of the North West

Whether you gaze up or down, the distinguishing marks of decadence are ubiquitous at The Palace of the Lost City at Sun City Resort. From the 10 000 pieces of Czech rock crystal forming the Crystal Court chandelier and 800 custom-crafted items in the King’s Suite to a dedicated 5 000 hours from nine artists to complete the Sistine Chapel-esque mural on the underside of the entrance dome ceiling. The luxury carries over to the 1.2 million indigenous and exotic plants, trees, and shrubs, including the over 25 hectares of surrounding gardens and waterscapes.

Billed as Africa’s first 7-star hotel in November 1992, the Sun International flagship quickly became a byword for ultimate opulence the world over, from Paris to Potchefstroom.

The 62-acre hotel, which marked the 30th anniversary of its establishment on 3 December with typical exuberant celebrations, has hosted more than 300 luminaries and heads of state, including Michael Jackson, Queen, Arnold Schwarzenegger, Oprah Winfrey, Thabo Mbeki, and an array of golfing superstars.

The hotel rolled out a raft of refurbishments ahead of the celebrations – another indication of Sun International’s commitment to investing in the fabled Sun City Resort and the local economy. The company has also recently poured funds into the Sun Vacation Club’s Lefika Villas and The Palace’s exclusive Privé casino.

“Shrouded in the mists of African legends, this brainchild of Sol Kerzner is also a favourite of ordinary South Africans. The Palace, with its global renown, is “a testament to the power South Africans hold when they stand together”

“The Palace is a special place. The attention to detail and stories coming out of the design are simply incredible. But it’s the staff who give The Palace its soul – without them, it’s all just bricks and mortar. The timeless design has made refurbishment difficult as we have tried to preserve and modernise without detracting from the heritage,”

– said Hoppé, struggling to contain his emotions as The Palace’s 30th birthday, which coincided with his own Sun International 30th work anniversary.

“The Sun International brand is one of splendour, and The Palace epitomises this. It places the brand at the top of the pyramid. The rooms look fantastic and, coupled with the architecture and wonderful garden – The Palace looks as good as it did on the day it opened,” – he said.

Each of The Palace’s African luxury-themed 326 rooms and suites have undergone a comprehensive decor refresh. The task of improving upon these iconic retreats fell to David Muirhead and Associates. Over three years, these interior architectural design specialists visualised and brought to life an authentically African accommodation concept. 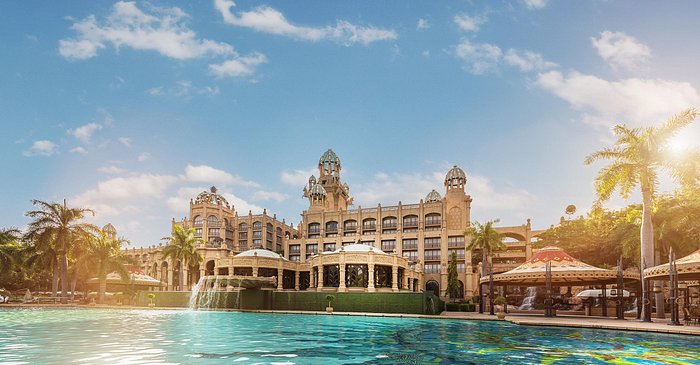 Overcoming the vagaries of the COVID-19 crisis along the way, they incorporated such features as standing lamps, locally produced artwork, sanitary ware and accessories in brushed bronze, forest-green marble, and shimmering Versace wallpaper. While aesthetically glorious, the additions are well suited to the rigours of hospitality.

“The Palace of the Lost City is an iconic destination. We needed to keep the hotel’s integrity and the vision of its founder, Sol Kerzner, intact while being sensitive to the brand’s history. Our job was to capture its essence – the fantasy of a lost African city, and evolve it. It was paramount to ensure the longevity of this spectacular international landmark hotel.”

The Royal Spa and Salon

The world-class Royal Spa and Salon is another welcome and long-awaited addition to The Palace line-up. This oasis of calm and tranquillity, inspired by its lush natural surroundings, features six individual treatment rooms, three palatial suites with hydro baths and sensation showers, a Rasul chamber, and a Himalayan salt sauna. All Sun City guests will be able to take advantage of a wide selection of treatments, from massages to body wraps, skincare therapy, and the Advanced Skin Clinic. A kids’ spa menu and nutritious meals and drinks are also available.

Why dress up the suites without outfitting the hosts?

The Palace staff are now donning swanky new uniforms designed by Afro-fashion heavyweights Sun Goddess. The research-based label took its cues from the local Tswana culture, the architectural patterns, and motifs from the various spaces of the hotel, such as the Olympic-sized swimming pool area. Clad in bright colours and both tribal and Big 5 emblems, the smiles worn by the staff were the perfect accessories.

And it won’t stop there. The birthday celebrations are set to continue through the festive season and well into 2023, allowing both staff and guests to share in the prolonged sense of excitement.

“The future belongs to those who believe in the beauty of their dreams,” said American stateswoman Eleanor Roosevelt. As fireworks lit up the Pilanesberg night, one feels certain that the dream that inspired The Palace – one shared by so many, from porter and chairperson to treasured guests and surrounding communities – will continue to be realised for the next 30 years and beyond.