Finally the big one is to happen on the dates 11/08/2021 when the long awaited money match between the reigning national open champion of Uganda Bwanika Mansoor aka MUTO and the defending champion of E-PLAY AFRICA annual pool championship and also the first ranking number one of Uganda Ssejjemba Ibrahim aka MAYWEATHER are locking horns on the table for a 2million prize for the winner in a race to 21 pool flames.

This is preferably the tightest rival in Uganda pool (cuesports).This dual or pair have met on several occasions or tournaments in the later stages & its never an easy call for who the eventual winner will be at the end of the match. Most times they meet in the finals of different tournaments, One is left to wonder who will triumph during this money challenge.

Briefly lets know about Ssejemba Ibrahim and his opponent non other than Bwanika Mansoor, whats so common and different in the history of pool in Uganda.

He is currently the Seed 1 in Uganda, player of NTINDA GIANTS POOL CLUB who are the reigning league champions, not forgetting the Champion of the SOUTHERN AFRICA MATHEW NGULUBE CUP which was held in Zambia plus the decisive frame player of the UGANDA CRANES POOL TEAM.

He started his pool career way back in 2014 in a pool club called QBR located in Kanyanya a suburb of Kampala city and later he transformed to Bukoto where he stated a serious business of being a professional pool player and currently he is playing with NTINDA GIANTS POOL CLUB since he left CAPITAL NIGHT POOL CLUB in 2019.

Ssejjemba is a consistent player who has managed to win as many championships both Organised by Pool Association of Uganda and other individual accolades where through this he was ranked SEED number one of Uganda after winning MATHEW NGULUBE cup in Zambia.

Ibra’s style of play is adored in most countries in Africa & by most players who watch him play / stroke the cue ball. Most of his fans & admirers rank him to be Africa’s number 2

Also known as MUTO is currently the reigning National Champion of Uganda & Seed 4 in the Uganda pool rankings. Mansoor is currently under UPPERVOLTA POOL CLUB & is also the favoured decisive frame taker in his clubs games because of his composure during games & consistency. 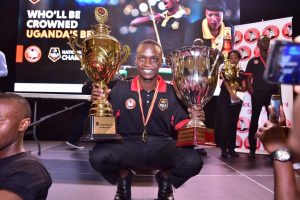 Ever since Mansoor came to the scene or lime light of pool he has proven beyond reasonable doubt that he is a man to beat with his never give up style. His personality might deceive you but he is a beast on table on a good day and He plays whoever feels he’s up to the challenge.

Mansoor too is on the POOL CRANES TEAM and he is one of the players that brought home the EAST & SOUTHERN AFRICA CHAMPIONSHIP 2021 which was held in Zambia early this year ( January 2021) thus he is the player that brought the crucial frame against TEAM SOUTH AFRICA in the men’s team semi final down in Zambia.

NB: In simple terms Bwanika is a HUSTLER on table while Ibra an EXPENDABLE, As of JONDU EMMY aka SERO who is part of the publicity team of PAU says that he hopefully see this match up to the decisive flame if at all both these players are on form well as Peter Kyobe also the head of the publicity team of PAU says that its without doubt these two players are the best players as of now and with all said and seen if there is any player to win IBRA who is on form is non other than Bwanika Mansoor, he adds on that Bwanika has all the capability to win Ibra following his recently witnessed performance on the table. However from their last five meetings we have witnessed SSEJEMBA being victorious in the last Five encounters with Bwanika Mansoor.

THIS IS GOING TO BE THE BEST CHALLENGE SO FAR IN UGANDA’S HISTORY OF POOL. E-PLAY AFRICA SAYS MAY THE BEST MAN WIN!!!