South African gambling group Tsogo Sun Gaming reported a 67 per cent drop in operating profit for the year to end of March, despite only shutting its operations on March 25, following an announcement by President Cyril Ramaphosa.

With operating profit down 67 per cent to R1bn, and earnings per share falling 87 per cent, Chief Executive Chris du Toid has confirmed the company is at an ‘advanced stage’ of being allowed to operate online.

“We are in an advanced stage of entering the online betting industry which is a separate segment of the market,” he explained. “If done responsibly on licensee level, this can protect the substantial investment and jobs created by casinos and should be seen as a natural progression.”

The group said it was facing uncertainty over when its various divisions, including casinos, limited payout machine and bingo, will be able to reopen.

“The business lost an estimated R2bn in revenue, and debt increased to R12bn since year end. Lenders have accordingly agreed to waiver the September 2020 covenant measurement period and to provide liquidity, by rolling up interest of R0,75 billion which will accrue until the 2021 year end, repayable within three years. COVID-19 had a marked impact on the group’s fourth quarter trading with international demand retracting as early as the last week of February 2020. Total income for the year of R4.5bn ended two per cent above the prior year with a two per cent growth in hotel rooms’ revenue and a seven per cent growth in food and beverage revenue offset by a seven per cent reduction in property rental income and a seven per cent reduction in other income. Revenues were favourably impacted in the third.” – said Mr. Chris du Toid 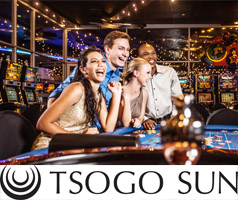 Gaming revenue accounted for the majority of revenue in the year, increasing 0.3 per cent to ZAR9.85bn, of which casinos generated ZAR7.3bn, down three per cent year-on-year. This broke down into ZAR5.5bn from slots, with the remaining ZAR1.8bn coming from table games. Tsogo Sun’s Galaxy Bingo hall division experienced growth of 10 per cent to ZAR856m, while revenue from limited payout machines on the VSlots network increased by seven per cent to ZAR1.7bn.

Mr. du Toit said added that the business needed to resume operations ‘as a matter of urgency.’

“The business is ready, with a robust strategy of enhanced hygiene and safety measures to enable a seamless re-opening to our loyal customers,”

“The focus during the lockdown has been primarily to eliminate variable operating costs as quickly as possible, reduce fixed costs and cancel non-essential and uncommitted capital expenditure in order to restrict the increase in net debt during the period the businesses is prevented from trading. There are many challenges that await me in my new role as CFO during these difficult times, but we are confident that the measures that have been, and are still to be implemented, will provide a long-term reduction in our cost base, without limiting future performance.”

The history and selection of a Bitcoin casino