Sports betting companies are counting losses following the postponement of major European football leagues over coronavirus. The postponement of the popular games has turned the lucrative sports gambling industry on its head, with clients holding back their money.

In an interview with Daily Monitor on Tuesday, Betway country manager Adellah Agaba predicted tougher times for the gambling industry.

“Obviously, this is really bad timing given this all happened right around the most profitable time when teams are fighting relegation and promotion,” Ms Agaba said.

She added that more than 70 per cent of their clients place bets on European top leagues.

“This market is sports heavy, people in Uganda bet sports more than any other thing. It is about 75 per cent sport, so it means if there are no major leagues, there is going to be a limp, especially in the gaming industry. With the only action in Russia and Brazilian inter-state leagues, clients are reluctant to place bets,”

But she is optimistic that less popular games among most gamblers such as the virtuals, E-sports and live casino could still attract some revenue. 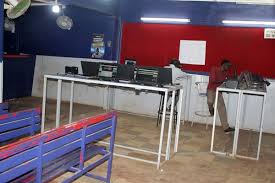 Mr Denis Kikonyogo, the business development manager at Champion Bet, which operates 123 branches countrywide, said what is happening “is unprecedented.” “It caught us unawares,” Mr Kikonyogo said.
Mr Reuben Robert, the operations director at BetOn Uganda, added that “this is a difficult time for a lot of people.” Nevertheless, he observed that there is an increasing interest in the non-sports gaming such as casino and virtual games. “Our clients will never miss a moment of entertainment,” Mr Robert said.

With limited sports action, some clients still go to betting houses to place bets. But Mr Kikonyogo said they are following guidelines on hygiene and he said they are working on acquiring thermometers.

“We have also instructed our tellers and managers to immediately report any symptoms,” he said.

Gambling has grown exponentially in the country since 2000, with 49 licensed operators in 2019 and 60 mobile phone applications. Sports betting has the biggest contribution with 32 licences where 22 operators run retail outlets.

Gaming related tax revenues have grown at an unprecedented rate growing from Shs240m in 2002/03, Shs11.1b in 2013/14 to Shs45b in the Financial Year 2017/18. Uganda has no reported case of coronavirus although neighbouring Kenya, Rwanda, Tanzania and DR Congo have confirmed cases. 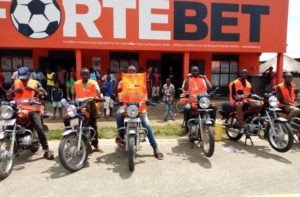 All Premier League, EFL and WSL and FAW football games were suspended until April while all Scottish professional and grassroots football games were suspended indefinitely.
Players from Everton, Watford and West Ham, as well as Hammers manager David Moyes, are among those self-isolating. Ligue 1 and 2 have also suspended ‘until further notice,’ among others.
In Jinja, a visit to Fortbet Betting parlours located on Iganga and Clive roads on Tuesday found most conspicuously deserted, except for workers lurking around while a handful of patrons played on slot machines.

Workers, who spoke to Daily Monitor on condition of anonymity, said the suspension of football matches has drastically reduced their customer base.

“We have fewer customers coming here and as you can see, laptops are empty; the only games we have are slot machines. However, there are other football leagues that are still ongoing such as the Turkish League, which keep a few customers coming to pass time,” a woman said.

At Gal Sports Betting on Main Street in Jinja, Ms Esther Birabwa, a worker, said the number of customers has reduced. “We need to pay workers, rent, electricity, DStv subscription and data for the internet, which money is not there at the moment,” Ms Birabwa said, adding that the only available games are ‘virtual’ and ‘spin and win,’ which have very few customers compared to football fans.

Mr Zubail Sowali, an employee at Kings Sports bet in Njeru Municipality, Buikwe District, said they usually get about 200 clients on a weekend but since the major leagues were suspended, they receive between 50 and 80 people.

In Mbarara Municipality, the usually busy betting centres were on Monday afternoon deserted, with employees sitting idly at the counters.

“We have virtual and normal football. Sales for normal (football) have decreased by about 90 per cent because of suspension of premier league games. Since morning, I have not sold a single ticket of normal. We are going to depend on only virtual but customers are few,”

“We have lost 95 per cent of our clients because we don’t have fixtures. But we will not close, our top management is handling.”

At Top Bet, there were only three workers at the counters, with many other serving points abandoned.
Ms Carol Namulindwa, a betting operator in Mpigi Town Council, said:

“The betting industry would survive if people turn to other games such as tennis and others. Our people usually place their bets on the major leagues, especially Premier League, La Liga and Serie A and these are the same leagues affected by the pandemic.” 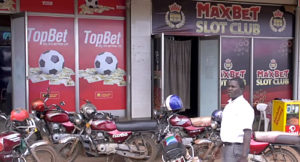 Before leagues were suspended, Ms Namulindwa said they were receiving more than 400 clients daily, but now, “we receive between 20 and 30 clients, and these are clients with little money. For example, one can spend Shs1, 000 to place a bet on 20 to 40 games.” In Buwama Town Council, Kamengo Trading Centre, Kibibi Town Council and Maya Trading Centre, some betting shops have remained closed since last Thursday. In Masaka Town, management of Gals Sports betting at Kayondo Plaza, have managed to put sanitisers for soccer lovers. At Top Bet, sanitisers were provided but very few people who enter the facility use them.

Mr George William Uche, the manager at Top Bet Masaka branch, said their clientele has reduced by 90 per cent since the suspension of European football.

“If this situation worsens, we are likely to close shop and engage in other businesses,”
– he said.

Mr Richard Mutoigo, a resident of Njeru Town, who always places bets on games, said his source of income has been affected.

“I could place bets on between five and seven teams from different leagues and I make between Shs200,000 and Shs 400,000 on a good weekend. But the matches were postponed and I do not know when they will resume so that I make some money,” he said.

At Zero Sports betting, the spokesperson, Ms Pauline Laker, said: “We are not refunding the money for those who had placed their bets on line.” 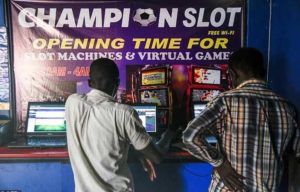 At Champion sports betting, Mr David Oringa, who is a daily customer, said he had placed bets on six games at Shs5,000 and expected to get Shs250,000 only to have his money refunded after the leagues were suspended. In Fort Portal Municipality, there was little activity at Champion Bet Centre, the most popular in the area. Their notice board had no fixture list.

In Kasese Town, Mr Sirajje Ssebyala, a supervisor at Kings Sports Betting, said they are now serving a small clientele following the ban on matches in most European leagues.
Mr Ssebyala revealed that his branch, which was serving about 200 clients every week, now receives about 70 people. Mr Nason Kule, an operator at Fort Bet on Rwenzori Road in Kasese Town, also said their clientele has drastically reduced. However, he explained that the few who flock the centre bet on leagues in countries that have not postponed their leagues.

At Sports Betting Africa (SBA), the condition was not any different, with only a handful of customers checking into the facility. One of the cashiers who spoke on condition of anonymity said they have lost many customers since the leagues were suspended. The cashier added that they are even worried about their own health since they serve so many clients dealing with all forms of currency.

“Actually, if the pandemic persists, we will be compelled to close until the world is free of the virus,” – he said.

The World Health Organisation recently issued a statement urging Ugandans to handle money carefully since it is a potential of spreading the viral disease owing to the fact that some people even use saliva to count money.