Africa has always been the continent that is famous for its vibrancy and passion when it comes to sport. So it makes sense that the rise of betting markets have captured the imagination of the African people still eSports is still very much behind and the numbers of bookies that offer such gaming experience is mimic.

However, in just a decade, an electronic sport (esports) has evolved from an underground culture into a mainstream gambling industry worth billions of dollars today. Africa is right behind in this ever growing market in the world of gaming, but which also holds incredible potentials when it comes to esportsbook betting, which generally falls into two main categories: cash betting and skin betting skins being virtual items that can be used within video games, betting usually for cosmetic purpose. Players trade skins via betting sites and use them as virtual casino tokens. While skin betting has been the more popular of the two, recent controversies and legal challenges have put downward pressure on the skin betting market, paving the way for cash betting to emerge.

Further, in 2012, only a small few understand eSports with a mere $130 million worth of the industry. Each year, those numbers are projected to grow. Recently, the amounts stake worldwide on eSports betting are steadily growing, starting from 315 million USD back in 2015 to 7 billion in 2018, and it is estimated to double by 2020. For instance, the base projection for the amount of customers placing eSports wagers is expected to be 6.5 million in 2020. 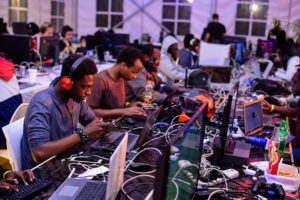 However, when it comes to the games themselves, the most popular eSports game on gambling market was League of Legends, as estimated to be 35 percent of the total esportsbook amount staked was attributed to bets placed on league of legends. While this is followed by Counter Strike Global Offensive (CS:GO), with 29 percent of the betting volume in 2016. Furthermore, with the rapidly growing phenomenon surrounding eSports continues to gather steam, in terms of numbers they will soon be equivalent to major sports such as football and rugby. Moreover, bookies have acknowledged the eSports boom and are selling tailored iGaming markets to an increasing number of operators in Europe.

A very good example, more online casino have discovered that it can be profitable to give betting on eSports games and use it as a way to attract players i.e. Bet365 eSport betting review shows that the site offers odds and ways to bet on eSports matches, an arena that has proved to be popular in the radical gaming industry.

However, the intersection of gaming and sports offers an innovative wave of branding opportunities, engaging content and activations of millions across the world. In this context, one of the most significant challenges will be legislation in Africa. Since it is still untapped industry, many jurisdictions will lack clear rules to regulate the eSports gambling sector in Africa, especially in the case of player’s age verification and skin gambling, but still there are a lot of untapped potentials in this sector in Africa.