Blackball pool ( sometimes written as black ball ) is also known as reds and yellows and English eight ball is a pool game originated from the United Kingdom and popularized across Europe and The Commonwealth, such as Australia and South Africa. In UK and Ireland its called simply “Pool”.

In considering standard fouls it is important to understand the concept of a combination shot.
In normal continuing play, that is when not playing a free shot, a player may strike an object ball from his or her own group and then go on to legally pot balls from both groups in that same shot.

Note, the object ball struck first must be a player’s own group ball, unless a free shot has been awarded.
When balls from both groups are potted in combination, it does not matter which balls fall into pockets first 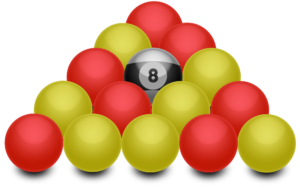 Combination shots can also be played involving the black ball. Of course on playing a shot in which the black is potted in combination with any other object ball, the frame is won only if no balls from a player’s own group remain on the table. Otherwise it’s loss of frame.

The term skill shot is also used to describe combinations

When a player plays a cue ball away from a touching object ball that cue ball is considered to have struck that object ball.
One consequence of this is that the cue ball need not subsequently contact another object ball when executing the shot. Though of course the other requirements of a legal shot must be met, such as striking a cushion.
It also follows that in playing away from a touching ball from his or her own group, the cue ball may then legally proceed to hit an opponent’s group ball. This is possible because the player is deemed to have first struck the touching object ball from his or her own group.

Under certain circumstances a player may automatically lose the frame.
This happens when a player….
Pots the black ball on an illegal shot. For example on a push shot.
Pots the black on a shot that leaves any of his or her group balls on the table.
Intentionally strikes a ball which is not an ‘on’ ball.
Deliberately touches or picks up a ball when not entitled to do so.
Does not attempt to hit an ‘on’ ball.

In some games a situation may occur when no legal shot is playable.
Whether this happens by accident or design it is a stalemate and the frame is restarted.
The referee will decide whether a legal shot is possible.
The original breaking player breaks again if a stalemate has been called.

Players should be made aware that penalties will be imposed for conduct considered unsportsmanlike.
The referee might issue a warning, call a standard foul, declare loss of frame, or even the loss of a match.
Unsportsmanlike conduct is any intentional behaviour that brings the sport into disrepute, or which disrupts the game to such an extent that fair play is affected.

Such behaviour might include distracting an opponent, intentionally miscuing, marking the table,
using equipment inappropriately or playing under the influence of drink or drugs. This kind of conduct could result in ejection from a competition or even the forfeiture of prizes, trophies and competition points.