SNOOKER.
Snooker is played on the same table and with the same size balls used for English billiards. The game is played with 22 balls, made up of one white ball (the cue ball), 15 red balls, and six numbered coloured balls including one yellow 2, one green 3, one brown 4, one blue 5, one pink 6, and one black (valued at 7 points). The player must first pocket a red ball and then try to pocket any colour he may choose, scoring the value of the ball that he has pocketed. He then alternately pockets red and coloured balls. Each red ball when pocketed remains in the pocket, while the colours when pocketed, as long as any reds remain on the table, are placed on their respective spots. Play continues until only the six colours remain on the table. Finally, the six coloured balls must be pocketed in the order of their values. When the last ball is pocketed, the game is ended. During play, when a player cannot hit the ball that the rules require him to hit (because of obstruction by another ball or balls), he is said to be snookered and loses his turn; this situation gives the game its name. 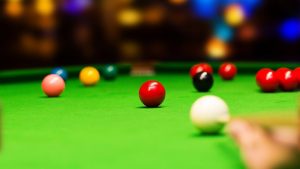 POCKET BILLIARD, OR POOL
Pocket billiards is usually played on a table 4.5 by 9 feet (1.4 by 2.7 m), although in special championships the table is sometimes 5 by 10 feet (1.5 by 3 m), and in some areas of North and South America the tables are as small as 3.5 by 7 feet (1.1 by 2.1 m). Pockets on the pocket billiards table are wider than those on the English billiards and snooker tables. In pocket billiards, 15 numbered object balls are used in addition to one white ball; the object balls numbered from 1 to 8 are in solid colours, those from 9 to 15 in stripes. At the beginning of play the 15 object balls are racked at one end of the table in a triangular pattern, using a triangular wooden or plastic “rack.” The first shooter breaks the formation with the cue ball; he then tries to sink the object balls in some designated order or manner. Not making a shot successfully allows another player to shoot. So does sinking the cue ball, which is known as “scratching.” 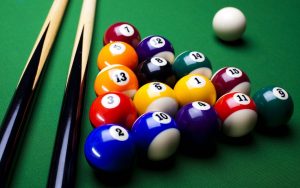 Many varieties of pocket billiards, or pool, are possible. The most popular version among recreational players is probably eight ball, in which one player attempts to sink all the striped balls followed by the 8 ball, while the other player attempts to sink all the solid balls and then the 8. The first to do so wins. Nine ball is often played in professional pool tournaments. In this game the object is to pocket the 9 ball after the cue ball first makes contact with the lowest-numbered ball on the table. As long as a shot first contacts the lowest ball, any ball pocketed allows the player to continue shooting. Another noteworthy version of pool is rotation, or “Chicago,” in which the object is to pocket the balls in numerical order, starting with the lowest number. The numbers of the balls are added up to determine the winner of the game. In so-called straight pool (also called 14.1 continuous pool, or rack pool), each player tries to sink 14 of the object balls in any order or combination. Before each shot, however, the player must call the number of the ball and the designated pocket; if successful, he scores one point.