Chinese 8-Ball has taken the world by storm, and is rapidly growing to become the next huge thing in televised cue sport, with simply enormous TV coverage, and rapidly growing prize funds. Our beginner’s guide to the game will get you acquainted with the equipment, some exciting new technology that has been developed off the heels of Chinese 8-Ball’s success, as well as some of the rules that have made Chinese 8-Ball so riveting to watch on Television in China.

What is Chinese 8-Ball – What’s the Appeal?

At a distance, Chinese 8-Ball is easy to understand. It combines elements from the three key cue sport disciplines into one game.

The game itself is just the standard game of 8-Ball that most people know – One player focuses on spots, another on stripes in a race to pot the 8-ball. There is however some key differences that shakes the game up a little.

With these changes, many professional players appreciate the game for having elements of all cue sport disciplines factored in, making for an ideal middle ground for players of all backgrounds to play, and have a somewhat even chance against each other. For example, the top Snooker players can go directly head to head against the top 9-Ball players. 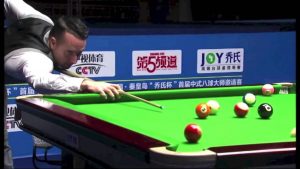 With this in mind, the World Chinese 8-Ball Masters has attracted players from every corner of the world of cue sports, with simply remarkable prize payouts (At the time of writing, the most recent prize pool for the event was $300,000, with $150,000 to the eventual champions. The event itself is treated as a massive sporting event in China as well, rocketing in popularity to receive in excess of 100 million live viewers.

Chinese 8-Ball has seen multiple rule revisions and modifications to streamline the game for Television purposes, pretty much all changes made to speed the game up, and make the game as exciting and tense for viewers as possible.

The general rules for the game are exactly the same as you would expect for normal 8-Ball Pool, but with some slight modifications.

How to Win a Match.
In modern Chinese 8-Ball tournaments, matches operate on a timed format where there are one of two ways to win. Players win matches either by being the first player to win 13 frames, or having the most frames won in 140 minutes for example (or whatever the allocated time limit is).

Like regular 8-Ball, Chinese 8-Ball inflicts penalties onto players for making foul shots. A foul can be made up of any one of the following offences –

When a foul is made, instead of two shots the opposing player is allowed to continue on with a ‘Ball in Hand’ shot, allowing them to place the cue ball wherever they wish, anywhere they like on the table. one notable omission is potting your opponent’s ball after contacting your own. This results in a simple loss of turn, but also play into a strategic play known as the ‘skill shot’.

Skill Shots
If you read above, you will notice that there are no penalties for potting your opponent’s ball in your turn. The specific rule goes as follows –

You are allowed to pot your opponent’s balls on the table if you pot your ball in the same shot.

In the example seen in the video above, the shot pots your own ball, but then proceeds down the table to pot your opponent’s ball in the same shot, however in this instance, this would have been a tactically wise play, as it lines up the final shot on the 8-ball perfectly for you to win the frame.

More specific rules can be seen in the video above, but the general point of these rules is to speed the game up, and encourage attacking, skilful play during matches.

How different is the Chinese Eight ball to others?
An interesting fact is that initially; there was no such thing as a cue specifically for playing Chinese 8-Ball. Instead, players normally played with either an American cue, or in some cases even a Snooker cue. Whilst these were serviceable for some players, a more refined cue for the game was conceptualised and brought to fruition by Chinese 8-Ball Masters champion, Gareth Potts.

Named the ‘Potts’ Cue, the basic design has been altered to make the cue ideal for playing Chinese 8-Ball. The cue itself has two key features that set it apart from any other style of cue:

Tapered ash shaft.
Carbon-Fibre, Thermoplastic ferrule (11.5 mm)
These two changes mean that the cue is well equipped for striking the larger, heavier balls used during the game, and the different ferrule completely eliminates any deflection whilst making shots, especially when making shots with side-spin.

The new cue design has become a runaway hit for players of the game, leading to long wait lists in China for players to procure one.