Africa is a sports continent. Its diversity is displayed on global platforms by the number of sports they participate in. All disciplines of sports in Africa have grown, from punters on betway.co.za, to sports arenas and sponsorships.

Sports began in Africa way back and have undergone a transformation over the years. Africa has steadily produced some of the most exceptional talents across different disciplines. Africans value sports as it is a tool that has been used to foster unity among the African communities.

Currently, one of the most significant contributors to the African economy is sports. Various sporting events are attracting sponsorship from Betway and other sponsors. Sports fans travel far and wide to support their teams. They travel in masses boosting both the travel and hospitality industry. There are tours and travel companies that have a specific package for sports tourism.

The continent recently got an opportunity to host the FIFA World Cup, the most followed event on earth. The event attracted millions of people. The host nation, South Africa used the opportunity to upgrade its stadia and hotel industry. The assembly of millions of supporters from all over the world brought an economic boom to the South Africans.

Africa has participated well in the global arena in different sports.

Different regions on the continent are known for particular games. For example, Ethiopia and Kenya are known for long-distance races, South Africa is known as a rugby powerhouse.

But, there is one sport that cuts across the whole continent as a fans favorite. Which one is it? 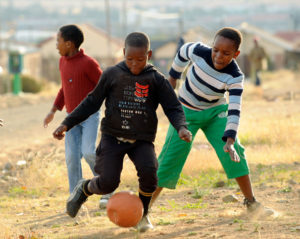 Football is undeniably the most popular sport in Africa. It is not just popular; it is the fans’ favorite. Since it was introduced to Africans by the British Empire in the late 1800s, it has continued to be loved more and more by the Africans.

Due to the fact that football requires minimum resources, it has penetrated to most parts of Africa. It is a familiar feat to find the youth in the remotest of African countries enjoying a game of football. Most of the African stars started playing at the grassroots level. The success stories of such stars have inspired many people on the continent to follow the sport. The African leagues have also grown thanks to sponsorship deals from governments and others like Betway and other online casinos.

The African leagues have become more competitive. This has made them more interesting and exciting to watch. African countries performing well on the global scene have also contributed to the love of the game. Some of the countries that have represented Africa in global tournaments include Nigeria, Ghana, South Africa, Cameroon, Tunisia, Senegal and Egypt. Great football personalities have also endeared people to the sport. Examples of such celebrities include Samuel Eto’, Didier Drogba, Emmanuel Adebayor, Yaya Toure, Stephen Pienaar among others. Many African players play for European countries.

The latest FIFA rankings put Egypt as the top team in Africa, followed by DRC Congo, Senegal, Tunisia and Cameroon as the others in the top five.

Technology has made the world a global village. It is easier for football fans in Africa to follow their favorite teams. Sports’ betting on Betway and other football online casinos have made the fans more informed. A fan has to analyze a team’s statistics before placing a bet on them.

Football will remain the most popular sport on the continent. The performance of African Stars on the global scene in foreign leagues makes it even more popular.

1 thought on “What is the most popular sport in Africa?”