Big cats are once again in the spotlight in the latest Yggdrasil powered release, Savanna Roar, an African themed title, with a max win of up to 10,459 times the initial stake, by budding mobile-first game developer Jelly Entertainment (Jelly).

The new studio joined the provider’s flourishing YGS Masters program around this time last year, however this is the first release since the two penned the deal.

Savanna Roar is a 5-reel, 4-row, medium to high volatility video slot where a rolling grassland scattered with acacia trees and native wildlife serve as the backdrop, with Locking respins, four different base game modifiers and Extra Spins featured. 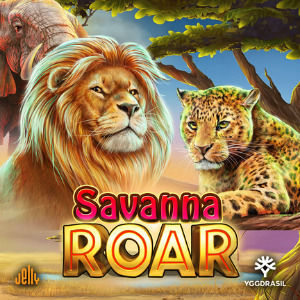 At home on the reels are four low paying symbols, including royals from J to A, while buffalo, rhinos, leopards, and elephants comprise the high pays.

Gameplay is straightforward, with winning combinations occurring, when starting from the leftmost reel, at least three identical symbols land on adjacent reels. Landing five-of-a-kind combination of higher paying symbols pays 0.8 to 8x the bet. The king of the jungle serves as the game’s Wild symbol and substitutes for all regular symbols.

Africa’s legendary “Big Five” get a nod here, with four base game modifiers that can be triggered randomly, and together with the sought-after “Big Cat” free spins bonus, can award players with a max multiplier of 9,544 times the stake!

“Savanna Roar brings slot gameplay back to basics, whilst remaining engaging, entertaining and full of win potential at all times. It is yet another creative addition to our YG Masters portfolio with a familiar theme, and is a good demonstration of what a young studio can achieve with the right industry understanding.”

McCarthy adds that with the game’s “aptly-named” features, players are able to enjoy the “differentiating aspects” each of the animals brings to the game.